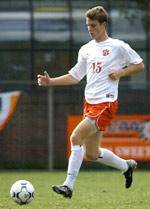 CLEMSON – Clemson and Air Force played to a 3-3 overtime tie in the second match of the Clemson Invitational at Clemson, S.C. Friday night.

Kenny Cutler and Brett Branan both had one goal and one assist each for the Tigers and Daniel Wasson had two goals for Air Force.

On Sunday, Furman will play Air Force at 12:30 p.m. and Clemson will play Coastal Carolina at 3:00 p.m. in the second and final day of the tournament.

“It is very frustrating,” said Clemson Head Coach Trevor Adair. “We made several mental errors. We can’t get it all on the same page. We do not have the flow or the killer instinct. Our lineup continues to change with injuries. We showed character in the overtime period. Air Force is a good team and you can’t shoot yourself in the foot and expect to win.”