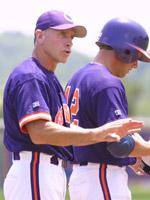 GREENSBORO, N.C. – The Atlantic Coast Conference’s nine head coaches selected Georgia Tech as the top pick to win the conference championship in 2004 with six first place votes and a total of 77 points. The Yellow Jackets return eight of nine position starters and a total of 20 letterwinners from a 2003 squad that captured the ACC Championship and finished the season with a 44-18 record, including a 17-7 league mark and a trip to the NCAA Baseball Championship. On the toes of the Yellow Jackets is Florida State who finished second with 61 points and a first place vote after finishing the 2003 season as the ACC regular-season Champions.

Clemson finishes in third place tallying 60 points and one first place vote. The Tigers finished last season with a 39-22 overall record and were the fourth seed at the ACC Tournament with a 15-9 conference record.

The North Carolina Tar Heels fill the fourth place slot with 58 points, while NC State placed fifth in the balloting with 52 points. The Wolfpack was followed by Wake Forest who finished with 36 points and then Virginia with 28 points. Duke was selected to finish eighth with 17 points and Maryland ninth with 16 points.