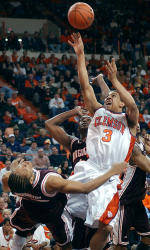 Florida State holds a 24-20 lead in the series with Clemson,but the Tigers have won 3 of 4 since Oliver Purnell became theTigers head coach, including a sweep last year. This will beClemson’s first ACC game of the year. The Tigers have lost each oftheir last seven ACC openers. All seven have come against Top 25teams, including four straight to top six ranked Duke teams. Thiswill be the first time Clemson has not opened the season against aranked team in 15 years. Clemson and Florida State are the top twoteams in the ACC in forcing turnovers. Florida State is first at22.4 and Clemson is second at 19.8. The Seminoles lead the ACC inturnover margin, a stat they ranked 11th in last season. Clemsonleads the ACC in steals and ranks second in blocked shots. Throughstats of December 19 Clemson and Alabama A&M were the only twoteams in the nation to rank in the top 20 in both blocked shots andsteas. Point guard Vernon Hamilton is Clemson’s scoring leader witha 12.0 average. Hamilton is shooting 50 percent from the field and38 percent on threepoint shots. He entered the season with a 40.4percent field goal percentage, including 29 percent on three-pointshots. Hamilton is trying to become the first Tiger guard to shoot50 percent or better over the course of a season since Michael Taitshot .517 in 1986-87. Clemson will be without the services of 6-9power forward James Mays for the rest of the season. The sophomorewas declared academically ineligible for the second semester priorto the Georgia game on December 28. He was Clemson’s top rebounderwith a 7.6 average through the first 11 games of the season, allClemson victories. In two wins over Florida State last year Clemsonoutscored Florida State on second chance points 38-10. ShawanRobinson has played some of his best basketball as a Tiger againstFlorida State. The Tiger senior averages 10.4 points per gameagainst the Seminoles and has made 16-36 three-point goals, a .444figure. Clemson has a +5.4 rebound margin and has beenout-rebounded in just three of the first 13 games. Freshman K.C.Rivers has 25 steals, 21 fouls and 24 turnovers. He is the onlyTiger with more steals than fouls and turnovers. Shawan Robinsonhas 23 three-point goals and 163 for his career. He needs just fiveto go past Chris Whitney (167) into third place on the Clemsoncareer list.