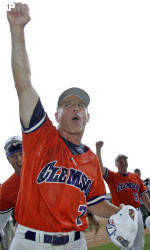 Tigers Move to #1 in the Nation in Baseball America, Collegiate Baseball Polls

Clemson, SC – Clemson will open its 2007 baseball schedule as the #1 team in the country according to Baseball America and Collegiate Baseball, who released their weekly polls on Monday. The Tigers, who moved to the top spot after previous #1 Rice went 1-3 last week, will play host to George Mason in a three-game series starting Friday at 4:00 PM at Doug Kingsmore Stadium. There will not be another Sports Weekly poll released until later this month, as Clemson was ranked #2 in its preseason poll.

In 2006, Clemson also moved to #1 prior to playing its first game. Baseball America ranked the Tigers #2 in its preseason poll, but they jumped to #1 in its February 6 poll. The Tigers opened the season against James Madison on February 17.