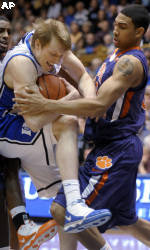 Kyle Singler added 16 points for the Blue Devils (12-1), who opened Atlantic Coast Conference play with a dominating defensive performance that shut down Trevor Booker and the Tigers from the start. Duke held Clemson (12-3, 0-1 ACC) to just 12 points in the opening half and led by 18 at the break, avenging last year’s lopsided loss while handing the Tigers their 13th straight defeat at college basketball’s notoriously hostile arena.

Demontez Stitt scored 17 points to lead Clemson, which managed an 11-point run to start the second half and briefly get back in the game. But the Blue Devils remained in control thanks to their perimeter pressure, which made the Tigers work for everything and struggle to get the ball inside to Booker – a preseason all-ACC pick.

Booker finished with 10 points on 4 for 11 shooting. The Tigers shot just 33 percent, including 3 for 16 from 3-point range, and seemed to struggle with their composure against pressure that pushed them further and further from the basket.

After a slow start, Duke eventually picked up the pace and followed its season-high 114 points against Penn on Thursday night with another good shooting day. The Blue Devils shot 50 percent – 60 percent after halftime – while Scheyer scored 19 points in the second half.

Duke’s defense certainly provided some margin for error in the early minutes, holding the Tigers to 5 for 30 (17 percent) in the opening half – including 6- and 8-minute scoring droughts – to take a 30-12 lead at the break.

After Clemson’s 11-0 flurry to open the second half, the Blue Devils re-asserted themselves with a quick burst of their own. First came a layup from Smith off a turnover, followed by a basket off a loose rebound from freshman Mason Plumlee. Then, Scheyer stole the ensuing inbound pass in the backcourt and quickly launched a 3-pointer that swished through the net, pushing what had been a 10-point lead back up to 42-25 with 13:52 left.

The Tigers got no closer than 11 points the rest of the way, adding a forgettable moment to their recent history of futility in an arena where they haven’t won in 15 years. Along the way, they’ve lost in a variety of styles: blowouts; tough, low-scoring battles; even one on a buzzer-beating basket three years ago that included a dose of clock controversy in those final seconds.

This time, the lowlight was posting a first-half scoring output and shooting percentage that each ranked as the worst under seventh-year coach Oliver Purnell. They also finished with as many fouls as points in the half, a fact the Cameron Crazies gleefully reminded them of with chants of “12 Fouls! 12 Points!” as the teams headed for the locker rooms.