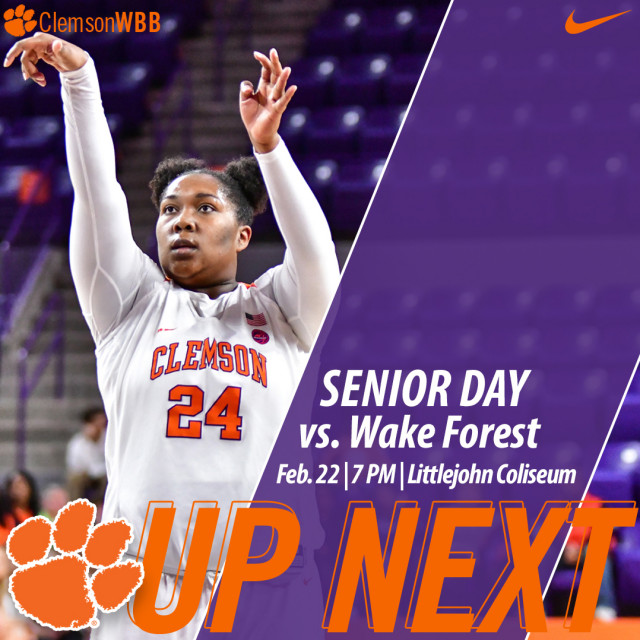 – Thursday’s game is Senior Day for Ivy Atkism and Alexis Carter. They, along with student equipment manager Audra Snipe, will be recognized in a ceremony 20 minutes prior to the start of the game at Littlejohn Coliseum.

– March is Women’s History Month, and to help Clemson University’s President’s Commission on Women kick off the celebration, there will be a pregame tailgate at Littlejohn Coliseum with members of several Clemson women’s sports teams. The tailgate will take place at 5:30 PM (enter through the Burton Gallery). The tailgate is free for Clemson staff members and their families, with a valid CUID. Tickets for the game can be purchased for $3 on ClemsonTigers.com, by using the promo code WOMEN.

– Clemson (11-17, 1-14 ACC) is coming off of a 53-45 loss to Virginia Tech on the road in Blacksburg, Va. on Feb. 18. Sophomore Kobi Thornton registered a double-double with 14 points and 10 rebounds, and senior Alexis Carter was also in double figures with 12 points.

– Clemson leads the ACC and ranks 30th in the nation in three-point field goal percentage defense, holding its opponents to just 28.3% from behind the arc on the season.

– The Tigers rank fifth in the conference in scoring defense (60.3), just 4.3 points behind NC State, who is first in that category.

– As a team, the Tigers rank third in the ACC in blocked shots (136) and blocked shots per game (4.9). The total blocked shots figure ranks 24th in the nation, while the per-game figure is 35th nationally.

– During the nonconference season, the Tigers won their Big Ten/ACC Challenge matchup, defeating Nebraska on the road by a score of 67-66 on Nov. 30. The Cornhuskers are now 19-7 overall, 10-3 in the Big Ten and receiving votes in this week’s AP poll. In that game, junior Danielle Edwards scored a career-high 33 points in the game, shooting 9-for-15 (60%) from field goal range, 5-for-9 (55.6%) from three-point range and a perfect 10-for-10 from the free throw line.

– Thornton leads the Tigers in scoring overall and in ACC play. The 2017 ACC All-Freshman Team selection is averaging 10.9 points per game on the season, and 12.8 points per game through 15 conference games. She has scored in double figures in 11 of the Tigers’ 15 ACC games.

– Edwards’ 72 steals and 2.6 steals per game rank third among all ACC players, and the 72 steals also put her at 28th in the nation in that category. On Nov. 13, 2017, Edwards posted nine steals in the Tigers’ 56-48 win over South Carolina State, tying the Clemson record for steals in a single game. Four different players have recorded nine steals in a game previously for the Tigers, however, it had not been done in 30 years, when Ramona O’Neil picked up nine steals against Virginia on Feb. 14, 1987.

– Clemson has a 49-22 all-time advantage in the series against Wake Forest.

– Last season, the Demon Deacons won a 68-56 contest on Jan. 12, 2017 in Winston-Salem, N.C. Kobi Thornton scored 18 points, then a career high, and Danielle Edwards had 11, while Aliyah Collier had a great all-around effort with six points, nine rebounds, five assists and three steals.