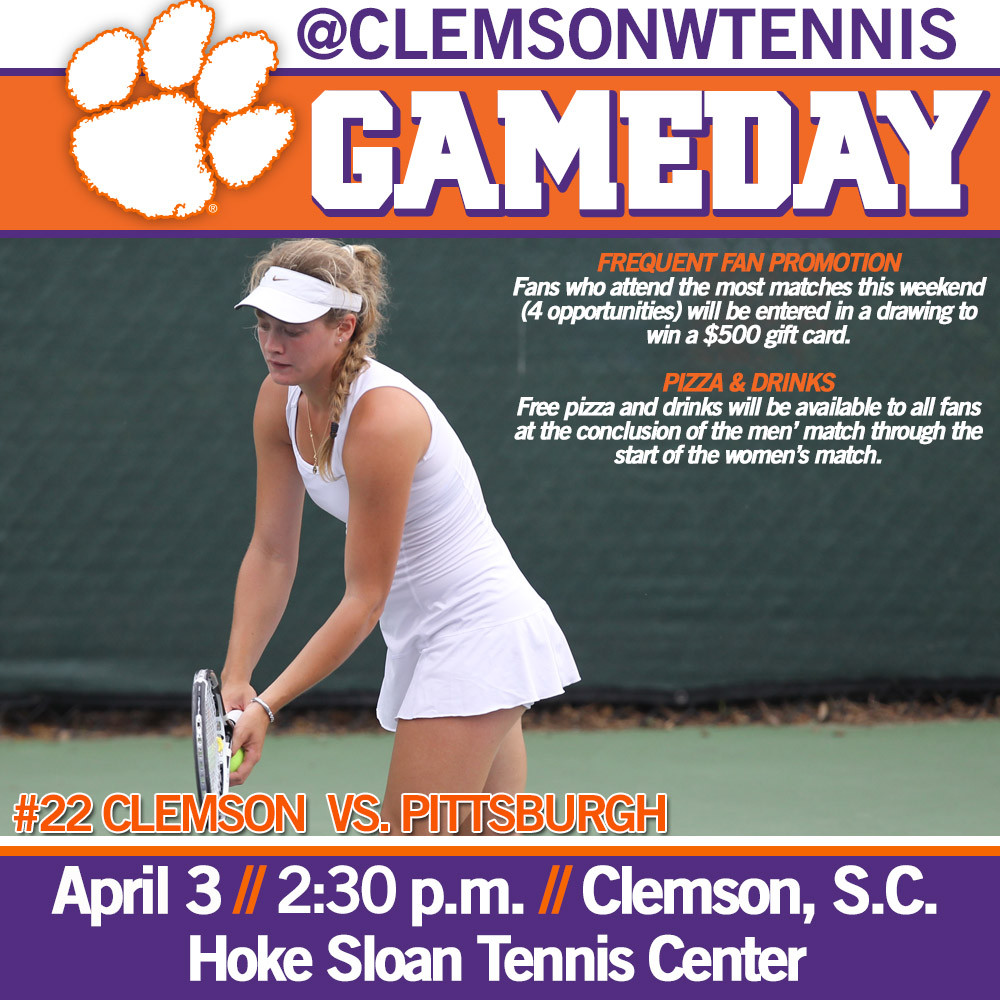 CLEMSON, S.C. – The 22nd-ranked Clemson women’s tennis team hosts two ACC opponents this weekend. The Tigers face Pittsburgh Friday and Georgia Tech Saturday, with both matches slated for 2:30 p.m. at the Hoke Sloan Tennis Center. Live stats will be available on ClemsonTigers.com and fans can also follow @ClemsonWTennis on Twitter for updates. Admission is free to all home tennis matches.

Clemson is 11-7 overall and 6-3 in the ACC so far this season. The Tigers have four ranked singles players and two ranked doubles duos in the ITA polls. Junior Joana Eidukonyte is the highest ranked Tiger, coming in at No. 19, and is 27-5 overall, 14-2 in dual matches and 8-1 in ACC play. Seniors Romy Koelzer (35), Beatrice Gumulya (84) and Jessy Rompies  (119) are also ranked in the ITA singles poll top 125. The duo of Gumulya and Rompies is ranked third by the ITA in doubles, with a 24-3 overall record, a 12-2 mark in dual matches and a 6-1 record in conference play. Koelzer and junior Tristen Dewar are No. 76 in the most recent doubles rankings.

Scouting PittsburghPittsburgh is 2-12 on the season and 0-9 in the conference. The Panthers are coming off of a 7-0 loss to No. 2 North Carolina on March 29. Lolade Ogungbesan at No. 2, and Callie Frey at No. 4 singles, each have three conference wins for the Panthers. Pitt’s doubles team of Amber Washington and Molly Wickman are 8-5 in dual matches this spring.

Clemson and Pittsburgh will match up for just the second time ever on Friday. In 2014, the Tigers, ranked 15th, defeated the Panthers 7-0 in Pittsburgh.

Scouting Georgia TechGeorgia Tech is 8-6 this spring and 5-3 in the ACC, and play Virginia Tech on April 3 before making the trip to Clemson. The Yellow Jackets are coming off of a 4-3 upset over No. 17 Duke on March 29. Paige Hourigan is Tech’s highest ranked singles player at No. 70, while Johnnise Renaud is ranked 92nd. Hourigan and Kendal Woodard are 22nd in the nation in doubles and Alexis Prokopuik and Rasheeda McAdoo are 74th.

Clemson leads the all-time series between the two teams with a 28-9 record. The Tigers are 11-4 all-time in matches played against the Yellow Jackets in Clemson. In 2014, No. 17 Clemson defeated No. 18 Georgia Tech 6-1 in Atlanta.