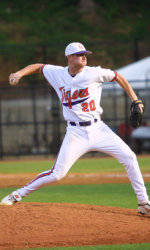 Clemson vs. Georgia Tech Clemson (27-16, 12-6 ACC), who is in fourth place in the ACC, will play host to second-place and #6 Georgia Tech (30-11, 16-5 ACC) this weekend in a three-game series at Doug Kingsmore Stadium. Game times are 7:15 PM (Friday), 7:00 PM (Saturday), and 2:00 PM (Sunday). All three games will be broadcast live on the radio by Clemson Tiger Sports Network and can be heard live via the internet at ClemsonTigers.com. Both Friday and Saturday’s games will be televised live by Comast/Charter Sports Southeast. Live stats will also be available on Clemson’s website for all three games.

The Series Clemson and Georgia Tech have met 180 times on the diamond, with the Tigers holding an 89-88-3 lead in the series dating back to the 1902 season. After the Tigers had won the last five games in the series prior to 2004, Georgia Tech won all four meetings last year, including a three-game sweep in Atlanta and a 11-7 win in 13 innings in the ACC Tournament at Salem, VA.

The Starting Pitchers Georgia Tech will start sophomore lefthander Lee Hyde (5-2, 4.14 ERA) on the mound Friday. The Fayetteville, GA native has made 11 starts for a total of 58.2 innings pitched. He has allowed 66 hits and 24 walks while striking out 52.

Clemson will counter with sophomore righty Stephen Faris (4-2, 1.20 ERA) on Friday. The Richmond, VA native and ACC leader in ERA has made three starts and 10 relief appearances for a total of 52.2 innings pitched. He has yielded 32 hits and 18 walks with 44 strikeouts. He also owns an ACC-best .184 opponents’ batting average.

The Yellow Jackets will send out sophomore righty Blake Wood (7-1, 3.39 ERA) to the mound Saturday. The Suwanee, GA native has made 11 starts for a total of 61.0 innings pitched. He has allowed 67 hits and 17 walks with 40 strikeouts.

The Tigers will counter with junior lefty Robert Rohrbaugh (5-2, 4.27 ERA) on Saturday. The Littlestown, PA native has made nine starts and two relief appearances for a total of 52.2 innings pitched. He has allowed 56 hits and 25 walks while striking out 45.

Georgia Tech’s starter for game three Sunday has not been determined.

The Yellow Jackets Georgia Tech, led by 12th-year Head Coach Danny Hall and ranked as high as #6, enters the weekend series with a 30-11 overall record and 16-5 ACC mark. Georgia Tech, who is 9-4 on opponents’ home fields, was swept at Virginia last weekend and fell to Georgia 11-8 on Wednesday night at Turner Field in Atlanta.

The team is leading the ACC with a .338 batting average and .439 on-base percentage. The Yellow Jackets have also totaled 115 doubles, 51 homers, a .519 slugging percentage, and over 10 runs per game. The club has 52 stolen bases as well, including 20 in 21 attempts by Tyler Greene and 18 by freshman Danny Payne.

Wes Hodges, who missed last year’s series against Clemson due to an injury, leads the team with a .417 batting average. He also has 16 doubles and nine homers. Matt Wieters, a freshman from Goose Creek, SC, is hitting .409 with six homers and 44 RBIs, and has a stellar .518 on-base percentage thanks to 30 walks. Wieters also leads the ACC in batting average (.522) in ACC games. Jeremy Slayden is Georgia Tech’s top power hitter, as he leads the team in homers (10) and is second in RBIs (48). Steven Blackwood leads Georgia Tech in RBIs (52).

The Yellow Jacket defense has also been solid, especially behind the plate. The team sports a .966 fielding percentage, while the team’s catchers have allowed only 23 stolen bases in 43 attempts.

The Tigers are hitting .305 as a team. The club has been especially effective with runners in scoring position, hitting .336 in that situation. Meanwhile, the pitching staff has allowed only 15 home runs while the offense has hit 50, meaning the team is hitting 3.3 long balls for every one it gives up.

Freshman Kris Harvey (.356) are next among Tiger leaders in batting average. Freshman Taylor Harbin has hit 18 doubles, three triples, and nine homers along with a team-tying-best 49 RBIs in 43 games. Harvey has an ACC-best 16 homers (including nine in ACC games) and team-tying-high 49 RBIs. Tyler Colvin is riding a 17-game hitting streak and is hitting .333 overall.

Leggett Has 19 Wins Over Ranked Tech Teams Clemson Head Coach Jack Leggett owns 19 wins over top-25 Georgia Tech teams since he became the Tigers’ head coach in 1994. That ties for the most top-25 wins over the same opponent on Leggett’s resumé, as he has also defeated a top-25 Florida State team 19 times. Overall, Leggett has 138 top-25 wins in his career, including 10 this season.

Leggett has defeated a top-10 Georgia Tech team 14 times, including nine top-five wins. Leggett showed success against the Yellow Jackets in his very first year as Clemson coach. That year, Clemson played a three-game series at Georgia Tech and won two of the three, a 9-8 victory in 10 innings on Friday night and a 7-4 victory on Sunday afternoon.

That was quite a series from a national standpoint, because Georgia Tech was ranked #1 in the nation by Baseball America, while Clemson was #1 by both Collegiate Baseball and Sports Weekly. It is the only time in Clemson history (perhaps in college baseball history) that teams ranked #1 in different polls faced each other. There are no recorded occurrences of that happening in college basketball or college football.

Leggett is 26-23 overall in his career against Georgia Tech, including 23-18 record as the Clemson head coach.

Harvey Establishes Clemson Dual Record Four times this season, Clemson junior Kris Harvey has hit a home run at the plate and won the game on the mound in a single game. He is the first Tiger in history to do that four times in the same season, breaking the record of three single-season occurrences established by Damon Vincent in 1961 and 1962. Vincent has the career record for this unusual accomplishment with six, so Harvey is just two short of that mark. Hitting a home run and gaining the pitching victory in the same game is unusual since college baseball adopted the designated hitter rule in 1974. Between 1974 and this season, a Clemson player hit a home run and was the winning pitcher in the same game just five times. Now, Harvey has done it four times in one year.

Harvey first accomplished the feat on February 27 when he struck out seven and allowed just two earned runs in 5.2 innings pitched in addition to hitting a home run in a victory over UC Irvine. That accomplishment took place 23 years to the day after Jimmy Key beat Valdosta State in a game in which he also homered. It was the only time Key accomplished the feat at Clemson, and the only other time this feat has been accomplished in the month of February in Tiger history.

Twice this year Harvey has hit two home runs in a game he has also won as Clemson’s pitcher. He accomplished that on March 19 against North Carolina and April 15 against Virginia. Harvey is the only player in school history to hit two home runs and earn the win in the same game in Clemson history. Harvey also had a home run and a win against Duke on April 8. That was one of his finest pitching performances as a Tiger, as he gave up just two earned runs, struck out nine, and walked just one in 7.0 innings pitched.

Vincent is one of just two Tigers to pitch a complete game shutout and hit a home run in the same game. He did that against Wake Forest on May 14, 1962 when he hit struck out 17 batters (sixth-highest total in Clemson history) in a 6-0 victory in Belmont, NC. Dave Van Volkenburg is the only other Tiger to hit a home run and pitch a shutout in the same game. He accomplished the feat against Jacksonville on April 23, 1969, a game in which he struck out 10. It is also interesting the note that Billy O’Dell struck out 18, the third-highest single-game total in Clemson history, and hit a home run in a 4-2 victory over Furman on April 23, 1952.

Harvey currently leads the ACC in home runs (16) and is tied for the team lead in wins (5). No Tiger has ever led the team in both categories in the same season. Jarrod Schmidt had 16 home runs and seven wins in 2001, but did not lead the team in either category. But, Schmidt is the only Tiger to hit at least 15 home runs and win seven games on the mound in the same season. Harvey needs two pitching victories to equal that accomplishment.

Tigers Slam Wofford 7-1 Doug Kingsmore Stadium. With the Tigers ahead only 3-1, D’Alessio, who came off the bench in the top half of the inning, hit an opposite-field grand slam to put the game out of reach. Kris Harvey also added a solo homer in the fourth inning that put Clemson ahead 2-1. The two Tiger homers were the only two extra-base hits in the game. Freshman reliever Chris Howard earned his first career win by pitching 2.1 scoreless innings. Jeff Hahn and Daniel Moskos combined to pitch the final 3.2 innings without allowing a run to close out the game.