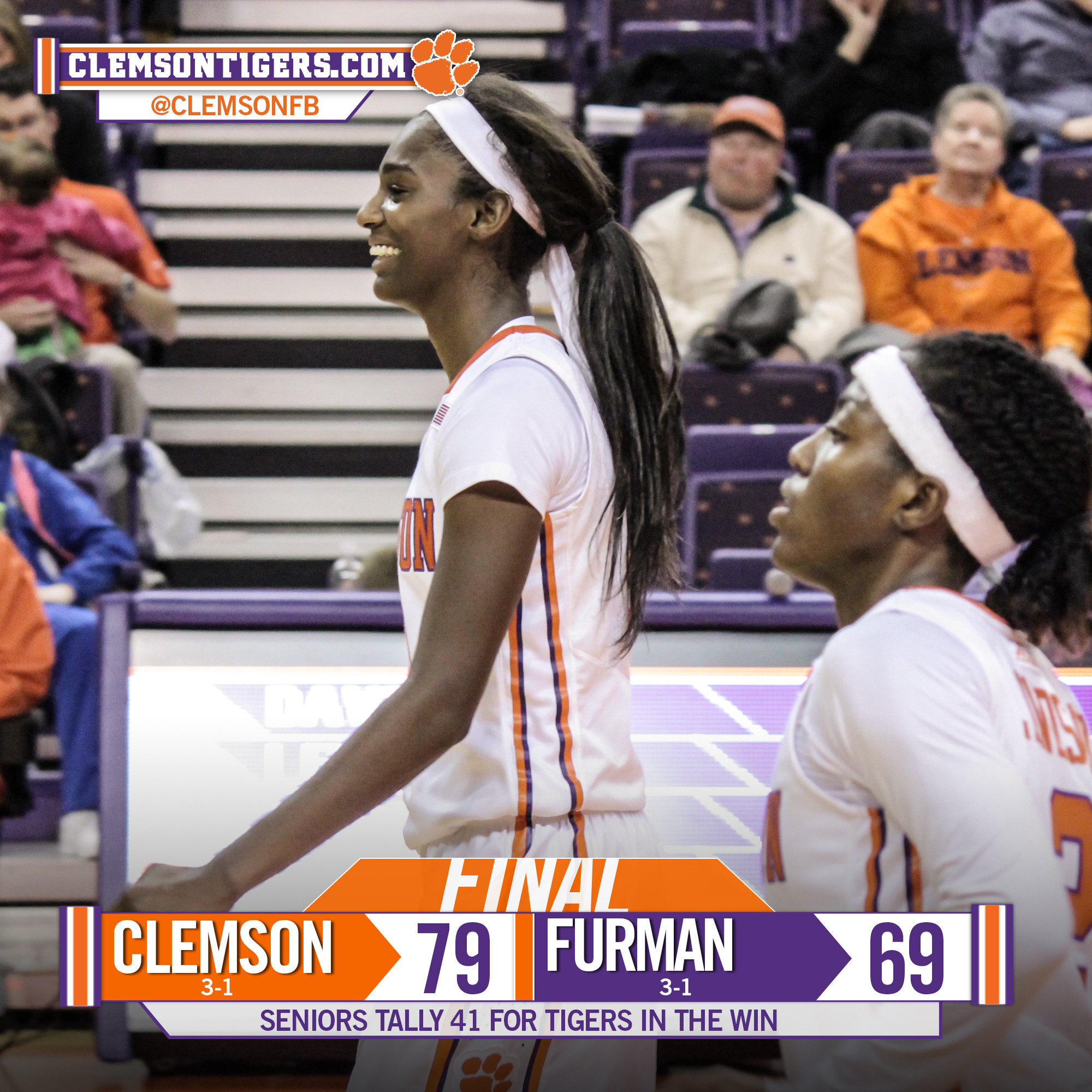 The Tigers improved to 23-3 in the all-time series with Furman, and won the fourth straight meeting overall.

Clemson took a 41-33 advantage into halftime behind strong offensive efforts from Dixon and freshman Nelly Perry, who each had nine points in the half.

However, Furman was far from finished, as the Paladins went on a 9-0 run out of halftime to take a one-point lead with just under 16 minutes to play. Clemson re-took the lead on a Dixon layup with 13:54 to play and would not give up the advantage, twice pushing the margin as high as eight.

Furman again responded whittling the lead down to three with five minutes to play, but Dixon and Lindsay had already seized control. They went on a 7-0 run to again push Clemson’s lead to 10, and sealed the game late with some clutch free throw shooting.

Freshman Shelbie Davenport added 13 points on 4-7 shooting, while notching a pair of assists and steals in a team-high 39 minutes.

It is the third time in four games, the Tigers have scored 79 or more points on the season. Clemson scored 82 points against Troy, the highest scoring output of the season.

Clemson shot 6-14 (43%) from three-point range, its highest percentage of the early season. Shelbie Davenport was 2-4 from behind the arc to pace the Tigers.

The Tigers drew three charges Sunday afternoon. Clemson had only drawn one charge entering the game.

Clemson forced 25 personal fouls, the most an opponent has committed against the Tigers on the season.

Clemson out-scored Furman, 36-11 off the bench and scored 24 points on 18 Furman turnovers

The Tigers had a season-low 12 turnovers in the game

Point guard Chelsea Lindsay had a career-high with 16 points becoming the sixth Tiger on the season to reach double-digits. The senior has started 69 of her 72 games in a Tiger uniform. Lindsay was a perfect 7-7 from the free throw line and has opened the season 11-12 from the charity stripe. She also drew a charge at the 13:47 mark in the first half.

Tiffany Lewis drew a charge at the 18:59 mark in the second half. She also had four assists, tied for her season-high set on November 16 against UNC-Greensboro.

With her 25 point scoring output, Nikki Dixon has passed Peggy Caple and moved into 16th in scoring in school history. The senior has scored 1,197 points in her career. It is the 16th time in her career she has scored 20 points in a game.

Dixon entered the game second in the conference in field goal percentage and was 8-13 (.615) in the contest. Dixon also registered a season-high nine rebounds. Her career-high is 12 on March 5, 2014 against Virginia Tech. Dixon also had a charge with 3:17 remaining in the game, the 29th on her career.

Shelbie Davenport reached double-digits for the third time in her first four games after scoring 13 points on 4-6 shooting in a team-high 39 minutes.

On the production from the seniors today:

“I have to give major credit and a big shoutout to Jackie Carson and Furman. That group is very-well coached and they do a great job. They do not back down. I am so glad Brittany Hodges fouled out because I thought she may end up with 40. She’s super athletic and had some great moves around the basket and we couldn’t box her out. But I’ve got to tip my hat to Chelsea Lindsay and Nikki Dixon. That’s what they have to do. They’ve got to step it up because our young kids were carrying us early on and they need to understand that senior leadership is so important. They did an outstanding job. They put some points on the board and directed and provided energy and support. They also brought a positivity about “we’re not gonna’ lose this game.””

On the play of Nikki Dixon:

“This is the Nikki Dixon that I want to see every game. She had a great couple days of practice and I’m definitely going to make sure to give her a major shoutout in the locker room in terms of how she bounced back and her effort tonight. That’s what she’s got to do. Everyone leads differently. Some people are vocal leaders. Some people lead by example and she does that through her work ethic. I want her to continue this and we need her to take this with us to the Virgin Islands. She needs to pack four sets of this in her bag to take with us to the Virgin Islands because we have a major challenge ahead of us.”

CLEMSON, S.C.– Nikki Dixon moved into sole possession of 16th place on scoring in school history as the Clemson Tigers lead the Furman Paladins 41-33 at the half.

Furman forward and leading scorer Brittany Hodges accounted for 17 points– more than half of Furman’s first half point total.

The Tigers have been stellar from the free throw line through the first three games and Sunday afternoon has been no different. Clemson entered the game shooting 38/48 (79%) from the charity stripe and have converted 9 of 12 attempts to begin the game.

The Tigers have had an excellent offensive half and are on pace to score over 80 points for the third time in four games, but they must contain Hodges or Furman will have an opportunity to steal a close one in the second half. Already five points over her season average in the first half, Hodges has the ability to score points in the post, but also can effortlessly drive to the basket, something Clemson must stop in the final half of play.

Lindsay and company have to continue to do an excellent job distributing the ball, creating easy opportunities that have been capitalized into points. If the Tigers can continue finding ways to reach the foul line and take advantage of easy baskets, the Lady Tigers will reach their third victory on the season.