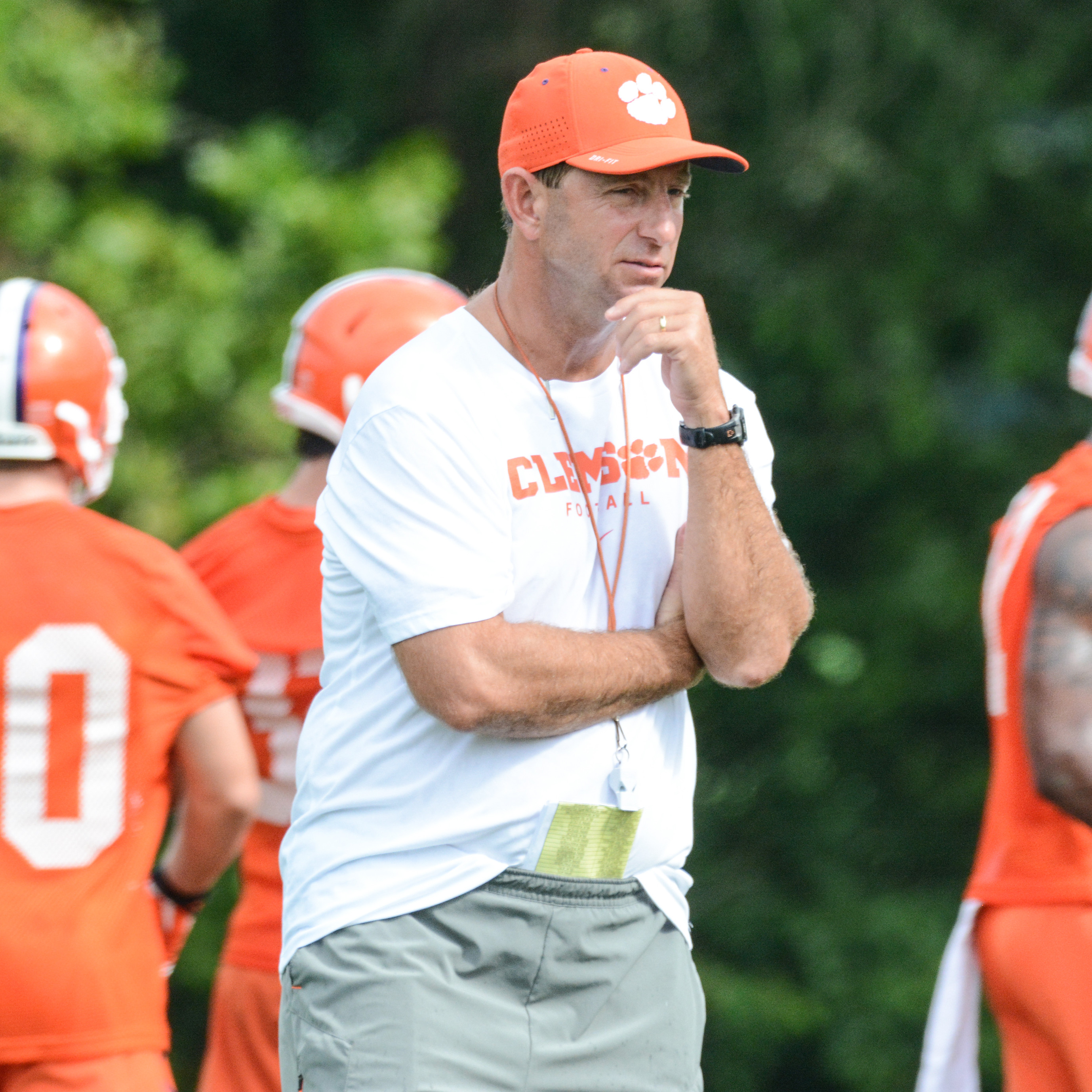 Clemson, S.C.—Clemson held a two-hour practice in the Jervey Meadows on Friday morning.   It was a physical workout in varying weather conditions, as there were periods of hard rain and brilliant sunshine.  Fittingly, Head Coach Swinney wore his B.Y.O.G hat (Bring Your Own Guts), a phrase he coined after the Notre Dame game last year that was played in a downpour.

The Tigers will hold a second scrimmage of the week in Memorial Stadium on Saturday morning that is closed to the public.   “Saturday will be a very important day,” said  Swinney, who has taken Clemson to at least 10 wins and a top 25 ranking each of the last five season.  “We will spot the ball in certainly areas of the field to assure we have practice from all situations, but the coaches will be off the field and we will simulate the gameday operation.  Coaches will be in the press box and on the field as we do for a game.

“We are going to let the guys play.  This will be our answer to a preseason game.  The only different between this and the NFL is I won’t cut anyone on Monday.  It will be a very competitive day and that includes on special teams.  We will work a lot on special teams throughout the practice.”

Swinney was pleased with his team’s work on Friday.  “We worked at a good pace today.  The defense came back strong today, but I am disappointed the offense could not put a second good day together.  We need to be more consistent.  But, overall I was very pleased with the team’s mental approach to the practice.  We got a lot of work in and made progress.”

The team took a break in the afternoon and had some recreation at the Reserve at Lake Keowee in nearby Sunset, S.C.  But, it will be a quick turnaround with the morning scrimmage on Saturday.  Former Clemson football lettermen will join the team for a meal in the West Endzone on Saturday afternoon.

Three players who were in yellow jerseys for last Wednesday’s situational scrimmage were upgraded to a green jersey on Friday, and were more involved in practice.   Those three players were Jay Guillermo (head injury), Jalen Williams (hamstring), and Ryan Carter (shoulder).

Swinney said after practice that he is excited to have Paul Harrington, the team’s nutritionist, on staff.  “Let me first say that Lisa Chan did an outstanding job for our program.  But, there are needs in this area for all the teams at Clemson, so Lisa is directing that area for all the other sports, and Paul has done a great job with our team.  Paul brings great experience to our program having worked at LSU, Auburn and Alabama.

Notes: Four rising high school seniors have signed scholarship papers with the Clemson program and are expected to enroll in school in January.  Those four are QB Hunter Johnson of Brownsburg, Ind,  LB/DE Logan Rudolph of Rock Hill, S.C.; LB William Spector of Calhoun, Ga., and OL Blake Vinson of Citra, Fla….one of the big plays of the day was turned in by defensive lineman Albert Huggins, who tackled a Clemson back in the endzone for a safety.