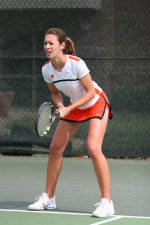 The five weeks spent in the top 10 sets a single-season record for the Tigers under current Head Coach Nancy Harris and is also the most in program history since 1986. Clemson was ranked among the top 10 in all nine polls that season.

Meanwhile, freshman Ani Mijacika jumped 40 spots to the #24 singles ranking. The Makarska, Croatia native is currently riding a 10-match winning streak and owns an impressive 20-5 record for the fall and spring seasons combined. She is the reigning ACC Player-of-the Week after knocking off then-ranked #5 Jenna Long of North Carolina last Sunday.

Fellow rookie Estefania Balda moved up to #70 in the individual polls, as she has compiled a 12-5 record in dual matches. Junior Carol Salge was then listed 78th after posting two straight-set victories last weekend.

In the doubles poll, Mijacika and Federica van Adrichem were ranked ninth, as the duo owns a 10-3 record with four wins over ranked opponents. Mijacika and Salge were also listed in the top-20 at #17 with an 8-3 overall ledger. The Tiger tandem of Balda and Ina Hadziselimovic entered the rankings for the first time at #41. They posted two wins last weekend, including an upset-victory over North Carolina’s 19th-ranked team, to improve to 5-1 on the year.

Clemson is tied for the league lead with a 6-1 ACC record and also boasts a 15-3 overall ledger. Last weekend, the Tigers posted a pair of top-20 wins as they defeated #20 Duke, 4-3, and 13th-ranked North Carolina, 6-1. Clemson will be on the road for the remainder of the regular season and will take on NC State and Wake Forest this coming weekend.