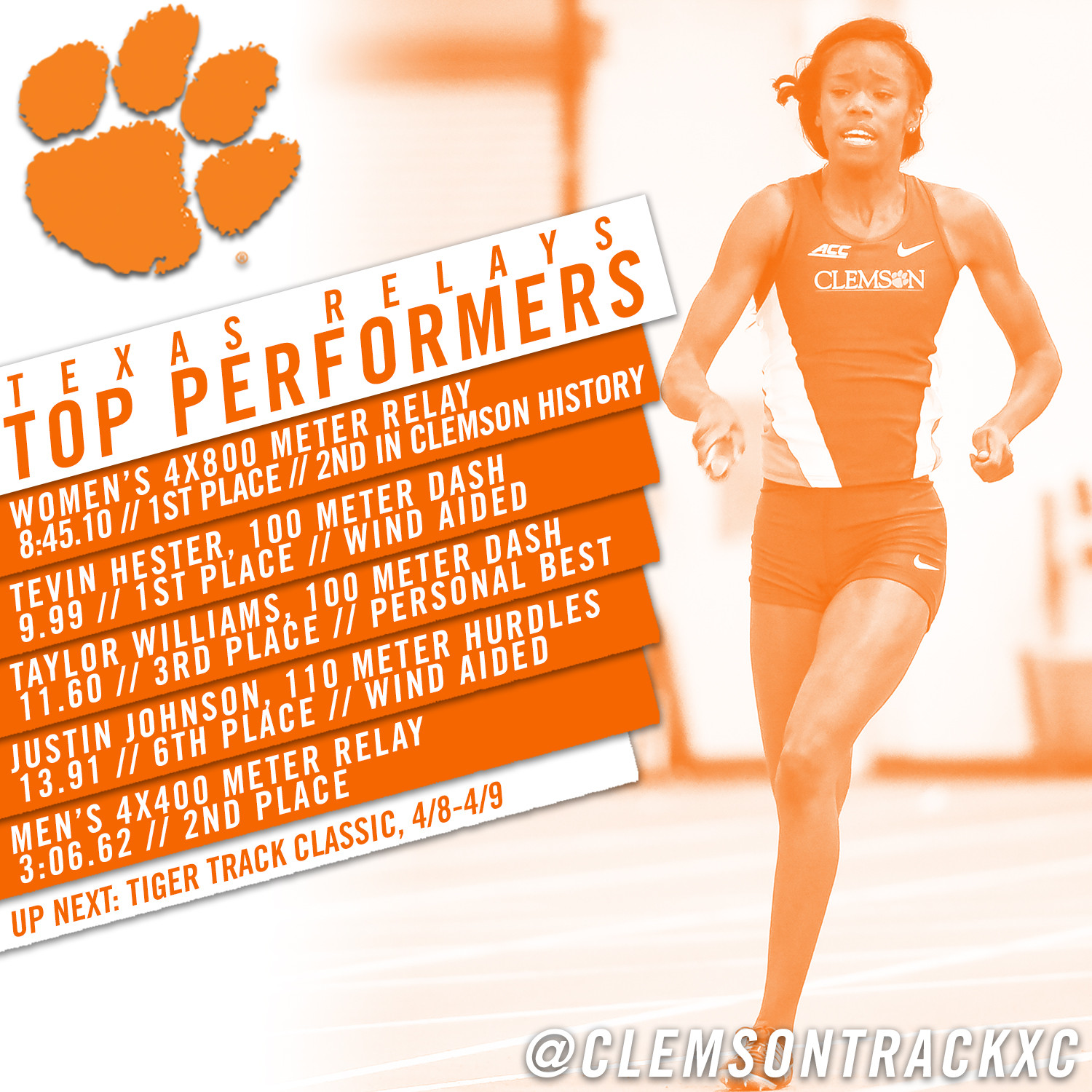 CLEMSON, S.C. — A second women’s distance group won an event at the Texas Relays and senior Tevin Hester sprinted to a sizzling time in the 100 dash to highlight Clemson’s final day of action in Mike Meyers Stadium. The 4×800 team followed Friday night’s victory in the distance medley relay with a win of its own Saturday morning, while Hester ran a sub 10-second short sprint for the second time in his career.

“We came out with two women’s relay champions, and that’s big for us,” Elliott said. “Overall, we had some good individual performances as well, especially with Taylor Williams. Tevin was the class of the field; he ran the race everyone was talking about. Breaking 10 seconds is a good start as we get toward the middle of our outdoor season. The men keep getting better as we near conference championship season.”

Hester popped out of the blocks and finished his 100 dash with a time of 9.99, but the time was wind-aided with a +3.0 meters per second tailwind. It was his second best all-conditions performance, and ranks No. 2 among all competitors in the NCAA this season.

The 4×8 team consisted of Imani McGowan, Brianna Blanton, Ersula Farrow and Tanisha Coppin. The group posted a time of 8:45.10, second-best in program history, en route to victory. The men followed with a season best and fourth-place finish in 7:31.46.

Taylor Williams continued her strong start to the outdoor season, posting a third-place effort in the 100 dash. The sophomore sprinter had a time of 11.60, a personal best and wind-legal showing.

The 4×400 relays both showed well. The men ran in a special section against professionals and turned in a time of 3:06.62 with a second-place effort. The women followed in eighth place, running a time of 3:37.36.

Justin Johnson competed in the men’s 110 hurdles final, clocking a time of 13.91 with a strong tailwind.

In the field, high jumper Mimi Land tied for third place with an outdoor season best mark of 5-8.5.

Clemson returns to action next week at the Tiger Track Classic in Auburn, Ala.