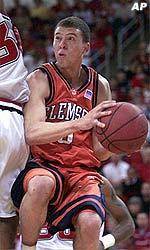 RALEIGH, N.C. – North Carolina State displayed its two strengths – defense and togetherness – to rebound from its worst loss of the season.

Anthony Grundy scored 23 points and Marcus Melvin had nine over a span of 1:22 in the second half as the 24th-ranked Wolfpack rolled over Clemson 83-54 Saturday.

“You could really sense a special unity today that even went beyond what we’ve had this season. We had some tremendous pinpoint focus,” Herb Sendek said of his team’s most lopsided ACC win of the year.

“As much tape as I’ve seen of Herb’s team I thought this was probably one of the best efforts I’ve seen from them collectively,” Shyatt said. “I didn’t feel there was one guy or two guys. There was a different guy every three or four minutes. They were excellent, and we were close to inept for a long period of time on offense.”

The Wolfpack (19-7, 8-5 Atlantic Coast Conference) fell to top-ranked Duke by 37 points Thursday night, surrendering a season-high 108 points. But N.C. State clamped down on defense this time against the Tigers.

“Anytime you lose, whether it’s to Duke or anybody, the first thing you want to do is get right back on the floor and play,” senior Archie Miller said. “If you take a hard loss, you’ve got to get right back up and go again. It was a great turnaround for us.”

N.C. State’s 19 wins are its most in the regular season since Jim Valvano’s club went 20-7 before the postseason in 1989. The eight ACC wins are the program’s most since 1991 – the last time the Wolfpack made the NCAA tournament.

“We still have a lot of basketball to be played and now is not the time to start looking at numbers,” Sendek said when asked about the NCAAs.

Ilian Evtimov added 18 points, six rebounds and five assists for the Wolfpack, while Melvin had 12 points as N.C. State shot 58 percent in the second half.

“He is one of the brightest young people in this league,” Shyatt said of Evtimov, one of five N.C. State freshmen. “As an opponent you don’t often enjoy anything, but I enjoy watching him play basketball.”

The Tigers have won just 58 league games away from Littlejohn Coliseum in 49 seasons.

“Maybe if we played into the wee hours we would have gotten hot,” Shyatt said. “We didn’t even get warm.”

N.C. State led 42-28 with 13:40 left before Melvin sank a pair of 3-pointers and three free throws after being fouled beyond the arc as the Wolfpack began to pull away.

“I got in foul trouble in the first half and coach took me out,” Melvin said. “I told myself at halftime that I was going to have to get refocused and play aggressive without fouling. I felt like my team needed me to step up.”

A Grundy 3-pointer less than three minutes later gave N.C. State a 22-point margin and the Wolfpack cruised from there.

Clemson guards Edward Scott and Tony Stockman scored 30 points each against the Demon Deacons three days ago, but were no factor in this game. The two combined for 15 points on 5-for-21 shooting as the Tigers were 1-for-12 from 3-point range.

“Those guys were playing as well as anybody on offense, so we had to get back to our identity that we’ve had all year,” Miller said of his team’s defense. “We had less than 24 hours to prepare and it was a lot about effort and grit today. We had to really, really, really lock down their guard because they were dominating against Wake.”

The Tigers missed 15 of their first 19 shots and turned it over 10 times before scoring on three straight possessions late in the half to trim a 15-point deficit to nine.

“They had wing players and post players making 3s,” Shyatt said. “That’s uncharacteristic, but if you’re me, it’s lethal. At that point, they are as good as anybody in this league.”