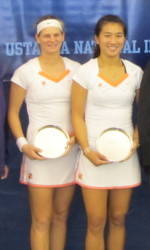 FLUSHING, NY – Josipa Bek and Keri Wong came up just short in their bid for a national doubles title, falling in three sets to Allie Will and Sofie Oyen of Florida in the USTA/ITA National Indoor Championship Finals. Bek and Wong, ranked fifth nationally, advanced to the finals at the Arthur Ashe Tennis Center in Flushing, NY after beating the nation’s number-one team on Saturday.

Oyen and Will capped an impressive tournament, in which they knocked off three of the top four seeds in the draw, including the third-seeded Tigers. The Tiger duo defeated the Gator team in October at the All-American Championships, but the Florida duo got revenge on this day.

Bek and Wong took the first set, 7-5 after trailing 5-3 early on. They fought off the next four games to win, 7-5. The teams traded games early in the second set, but Florida was able to pull away for the 6-3 win in the set, and they jumped out early and held on for a 6-3 win in the third set to capture the title.

“I thought the Tigers played bravely today against a very solid Florida team,” said Nancy Harris. “Our team missed some volleys and smashes here and there particularly at the start of the second set that could have made the difference.  I wouldn’t change anything about the Tigers’ game style, they are simply terrific.  Perhaps we could have been a little more unpredictable but that wasn’t the difference.”

The match concludes the fall portion of the Tigers’ schedule, as they will resume with the team dual-match portion of their schedule in January.

The Clemson tandem had one of the most impressive fall seasons in the nation. The duo advanced to the finals of the ITA All-American Championships and the USTA/ITA National Indoor Championships, while also taking the ITA Carolina Regional Doubles Championship. They finished with a 13-4 overall record, and posted wins over six nationally-ranked opponents, including the no. 1 team from California in the semifinals.

“We have the one of the best teams in the country if not the best,” said Harris.  “Keri is stellar and is like watching a surgeon with every sure shot as she sets up her points.  Jo is like a gymnast all over the court and full of surprises and excitement.”

“I am really proud of our team and for Clemson,” said Harris. “This Tiger duo has gone beyond any other Clemson team men or women in the history of Clemson tennis to reach the finals of two collegiate Grand Slam events and they made both finals in the same season.  I can only say well done Tigers let’s keep it going, we are so proud of you.“