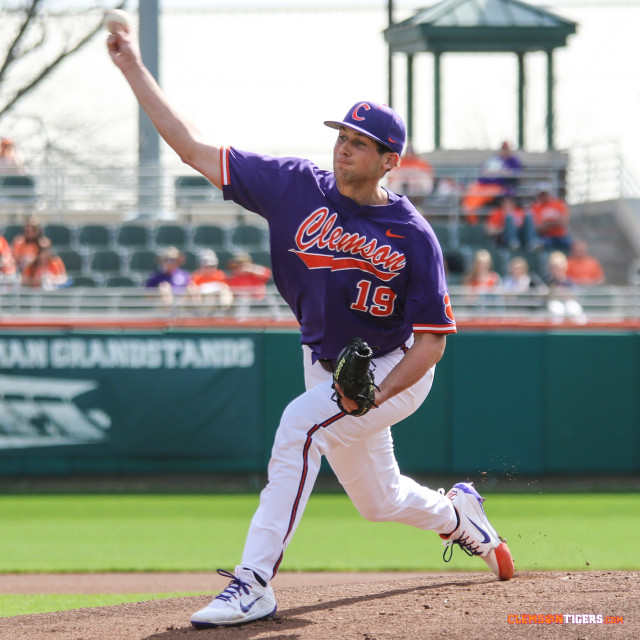 The No. 7 Tigers face No. 23 South Carolina three times at three different sites this weekend in their annual rivalry series.

REEDY RIVER RIVALRY TAILGATE PARTY
• The Reedy River Rivalry Tailgate Party, which opens Saturday at noon is on Main Street at Fluor Field.
• Food, drinks and interactive exhibits for fans of all ages can be found on Main Street all day on Saturday.
• There will be live music from a band throughout Saturday starting at 12:30 p.m.

CLEMSON OVERVIEW
• Clemson rallied to beat Winthrop 9-8 in 10 innings on Tuesday after sweeping No. 10 Dallas Baptist in three games at home last weekend.
• The Tigers are averaging 7.4 runs per game and hitting .282 with a .413 on-base percentage and four steals.
• The pitching staff has a 2.92 ERA, .207 opponents’ batting average and 3.65 strikeout-to-walk ratio and Clemson is fielding .987.

SOUTH CAROLINA OVERVIEW
• South Carolina is led by first-year head coach Mark Kingston.
• The Gamecocks lost at home to Furman 6-4 on Tuesday. They are hitting .277 and have a 2.56 ERA and .979 fielding percentage.
• LT Tolbert is hitting .469 with two of the team’s 18 homers and eight RBIs, while TJ Hopkins is batting .324 with six stolen bases.

QUICK HITS
• Clemson has won each of the last three regular-season series against South Carolina with a 2-1 record.
• Clemson is the designated home team and will occupy the first-base dugout for Saturday’s game at Fluor Field.
• The Tigers’ 8-0 start is their best since starting 8-0 in 2010. The last time Clemson started 9-0 was 2002, when it won its first 13 games.

WHARTON EMERGING IN FINAL SEASON
• Senior Drew Wharton entered the season with a career .220 batting average, no homers and 20 RBIs in 74 games (22 starts) over three years.
• With the departure of two outfielders from last year’s team, he has made the most of his chance to contribute in 2018.
• He is hitting .308 with four homers, a double, 13 RBIs and a .375 on-base percentage in eight games (seven starts) this season.
• He hit three long balls, the first three of his career, in the series against No. 10 Dallas Baptist in February.