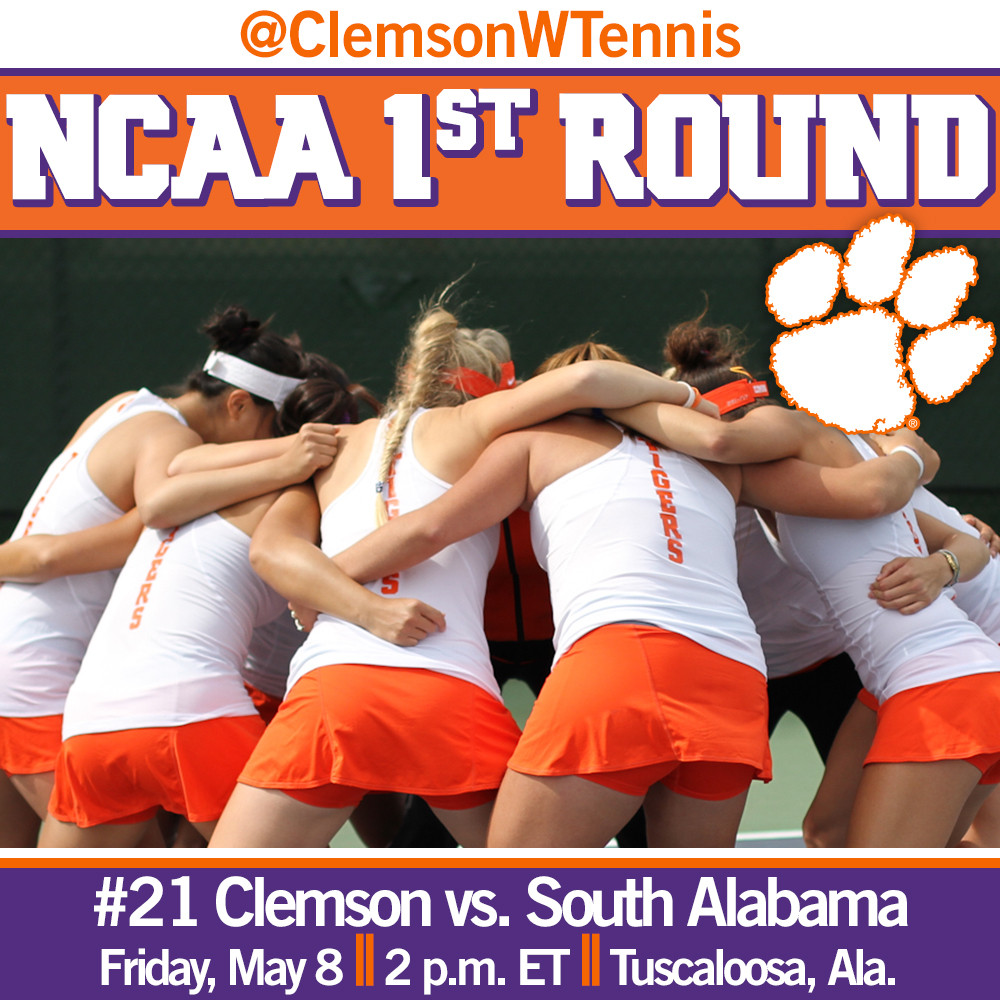 CLEMSON, S.C. – The 21st-ranked Clemson women’s tennis team opens play at the 2015 NCAA Championships in Tuscaloosa, Ala. on Friday against South Alabama at 2 p.m. ET (1 p.m. CT). The Tigers are the No. 2 seed in the Tuscaloosa Regional, while the Jaguars are the No. 3 seed. The winner of Friday’s match plays the winner of No. 1 seed and 13th-ranked Alabama and No. 4 seed Samford in the tournament’s second round on Saturday. Live stats for the tournament will be available on RollTide.com, and updates will also be provided on Clemson’s Instagram and Twitter channels, @ClemsonWTennis.

The Tigers are 16-9 overall in 2015, and finished the ACC regular season with a 10-4 record. Clemson is coming off a 4-1 loss to eventual 2015 ACC Champion Virginia in the quarterfinals of the ACC Tournament. The team boasts three ranked singles players, Joana Eidukonyte (12th), Romy Koelzer (36th) and Beatrice Gumulya (60th). Eidukonyte has a team-best 20-3 record in dual singles matches this season, and has 10 wins over nationally-ranked players in 2014-15. The Tigers’ doubles duo of Gumulya and Jessy Rompies is currently ranked fourth in the nation, and has a 26-4 overall record, a 14-3 mark in dual matches and seven wins over nationally-ranked opponents.

Friday’s match against South Alabama marks Clemson’s 14th straight appearance in the NCAA tournament. The Tigers have won their first-round matches in the previous 13 seasons, and have reached the Sweet 16 nine times and the Final Four twice (in 2004 and 2005) during that time. In last year’s national tournament, Clemson advanced to the Sweet 16 before falling to Duke, the number-four national seed.

Scouting No. 3-Seed South AlabamaThe Jaguars are 21-2 in 2015, with their only two losses coming to Middle Tennessee (4-1) and North Texas (4-2) in their final two matches of the regular season. South Alabama is coming off a 4-3 win over UT Arlington in the Sun Belt title match, which secured the team’s first trip to the NCAA Tournament since 2005. The Jaguars’ top doubles team of Newton and Valkova is undefeated in dual doubles matches and is on a 13-match winning streak entering Friday’s contest. South Alabama has won the doubles point in all 23 of its matches in 2015. Laura Matuskova leads the Jaguars in singles wins with an 18-2 dual match record, all at No. 5 and 6 singles.

Clemson has an 8-4 all-time advantage over South Alabama, and is 1-0 versus the Jaguars in matches played at neutral sites. The last meeting between the two teams was during the 2007 regular season, a contest the Tigers won 6-1 at Hoke Sloan Tennis Center on March 1.

Scouting No. 1-Seed AlabamaThe 13th-ranked Crimson Tide has a 17-7 record in dual matches in 2015 and is coming off a 4-0 quarterfinal round loss to eventual SEC Champion Vanderbilt on April 17. The Tigers and Tide faced seven common opponents during the 2015 regular season. Both teams defeated South Carolina, Syracuse and Virginia Tech, and fell to Florida and Miami; however Alabama won its contests over Duke and Georgia, while the Tigers fell to the Blue Devils and Bulldogs. Three members of the Crimson Tide squad are listed in the ITA singles poll – Erin Routliffe (34th), Maya Jansen (67th) and Danielle Spielmann (72nd), and three doubles combinations are also ranked by the ITA – Jansen/Routliffe (first), Jansen/Perez (54th) and Perez/Spielmann (57th). Top-ranked Jansen and Routliffe are 18-1 in dual doubles matches in 2015. Clemson’s Gumulya and Rompies met the Alabama pair in the quarterfinals of the ITA All-American in October 2014, and came away with a three-set win.

Clemson has a 10-1 record in the series against Alabama and a 3-1 record in matches played in Tuscaloosa. The Crimson Tide won the last contest between the two teams, a 4-2 victory in the second round of the ITA Kickoff in Tuscaloosa on Jan. 27, 2013.

Scouting No. 4-Seed SamfordThe Bulldogs have a 15-8 overall record and went undefeated (7-0) in SoCon play in 2015. The team has won 11 of its last 12 matches, including a 4-1 victory over ETSU to claim its first conference championship title since joining the SoCon in 2009. Head Coach David Vest was named the SoCon Coach of the Year for 2015 as well. The Bulldogs’ doubles duo of Moolman and N’Tcha is currently ranked 79th nationally. Moolman leads the team in singles victories, with a 15-4 record, primarily at the four slot. N’Tcha and Savannah Wood have 14 wins apiece, at No. 1 and No. 6 singles, respectively.

If the Tigers and Samford meet in Saturday’s second round, it will be the first meeting between the two teams on the tennis court.