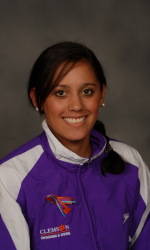 RALEIGH, NC – Clemson’s Swimming and Diving program picked up a pair of ACC wins on Saturday afternoon as the men downed NC State 165-133 and the women won 171-129. The men improve to 9-2 overall and 4-2 in the ACC, while the women have won five out of six to even their record at 6-6 overall and 2-4 in league competition. The Tigers have had three meets in the past eight days, all in the state of North Carolina.

Head coach Chris Ip said, “We are excited. We scheduled these two meets to try to challenge our athletes where they had to do a lot of traveling a still face a tough ACC opponent. We saw great efforts for the whole team. ” The women, winners of five out of the last six, started off the meet with the group of Michelle Parkhurst, Katrina Obas, Peg Carter, and Lauren Sindall winning the 200 medley relay in 1:46.94. For Parkhurtst and Obas, it was the start outstanding individual meets.

Parkhurst won the 200 free in 1:51.53 and then bounced back and won the next event, the 100 back, by almost three full seconds. She would then go on to finish second in the 100 free to teammate Rachel Regone, who also won the 50 free, an event that she has not been beaten this season. Regone would later add a runner-up finish in the 100 fly as well.

Danielle Kazilionis won the one-meter diving event, and finished runner up to NC State’s Chelsea Ale on the three-meter event.

The women also had valuable contributions from several freshmen. Meggie Mizelle won the 200 fly, Sarah Smith took second in the 500 free and third in the 1000 free, and Elizabeth Savage took third in the 200 IM and 200 breast and finished second to Obas in the 100 breast.

The men’s side picked up their ninth win of the season, tied for second most under Ip. The 200 medley relay group of Jay Crout, Andy Bergren, Adam Farnham, and Mark Vahle duplicated the women’s feat, winning the event to lead off the meet.

The Tigers will return to action against nationally-ranked Florida State on January 26 at 11:00 am in McHugh Natatorium. The meet will be the first home meet for the Tigers since November 9, 2007, and will be broadcast live on ACC Select.