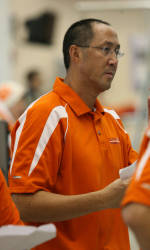 The Clemson women upped their all-time mark against Duke to 17-0, while the Clemson men still hold a 21-18 series lead. The meet was close throughout the afternoon, as the Tigers and Devils traded blows on both side, with the meet ultimately being decided in the final two meets.

Seniors Michelle Parkhurst and Rachel Regone closed out their regular-season careers on a high, with each winning four events. Regone took home a win as the anchor of the 200 medley relay group (1:44.29), won the 50 free in 22.92, the 100 free in 50.90, and helped clinch the meet in a win as the lead-off swimmer of the 400 free relay. Regone ran her dual-meet record in the 50 free to 15-1 in the past two seasons with the win.

Parkhurst notched a win in the 200 free, edging fellow All-American Ashley Twichell. Parkhurst got out quicker than Twichell, and was able to hold off the sophomore in the final 50 yards to win the event in 1:50.26. Parkhurst then competed in the next event, the 100 back, winning in 56.53, after trailing Duke’s Meghan Dwyer and freshman teammate Kelli Kyle through the first 50 yards. Parkhurst was able to catch and pass the two, who finished second and third, respectively, for the win. Parkhurst then returned for a win in the 200 back over Dwyer. She then anchored the meet-clinching 400 free relay for her fourth win on the afternoon.

The men, who failed to win an ACC dual meet for the first time since the 1991-92 season, certainly gave their best effort, taking the loss on the final event. Matt Angelini, Chris Dart, and Joe Knecht gave Clemson a first-second-fourth finish in the 200 IM, the second to last event.

The all-freshman `A’ 400 free relay of Seth Broster, Myles Oliver, Derek Barre, and Chris Dart held a small lead in the final event, but were unable to hold off the Blue Devils in the final two legs. Clemson needed a one-two finish to win the meet.

Will Clark and Alex Carr saw plenty of action for the Tigers as well, taking second and third, respectively in the 100 free and 500 free. In each case, they were edged by Duke’s Nate French.

Alexandra Allen had her best meet of season, taking second in the 50 free in a season-best 23.58 to finish second behind Regone. Allen also took second in the 100 free, coming in at 52.13, and was part of the winning 400 free relay and the third place 200 medley relay group.

Clemson is now off until the ACC Championships in College Park, MD. The women’s meet and all of the diving will take place from Feb. 18-21. The men’s swimming portion will take place the following week, from Feb. 25-28. Both events will be available on ACC select for live viewing.