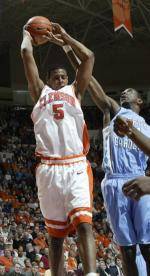 Clemson has beaten North Carolina four of the last six years atLittlejohn Coliseum, including each of the last two years under twodifferent coaches. Clemson won the contest last year 81-72 when itmade 11-13 three-point goals, an all-time Clemson record. Clemsoncenter Sharrod Ford has shot 23-32 from the field over his careeragainst North Carolina. a .719 figure. Ford currently ranks in thetop 10 in the ACC in rebounding, blocked shots and field goalpercentage. He is in the top 10 in Clemson history in field goalpercentage and blocked shots and is now 15th in rebounding. Juniorguard Shawan Robinson has made 10-20 three-point goals in hiscareer against North Carolina, including 5-6 in last year’s Clemsonvictory in Littlejohn Coliseum. Robinson is shooting 51.3 percentfrom three-point range in Littlejohn Coliseum so far this season.In seven of the last eight Clemson games, the team that has won thefirst five minutes of the second has gone on to win the game. Thatincludes both games last week. Clemson went on a 10-2 run to openthe second half at Florida State and went on to a two-pointvictory. Virginia Tech went on an 11- 5 run to open the second halfin its two-point win over the Tigers last Saturday. Clemson HeadCoach Oliver Purnell and North Carolina Head Coach Roy Williamswere assistant coaches on the USA Basketball’s 2004 Olympic Team inAthens, Greece. Clemson’s game with North Carolina is its only homegame in a 19-day period between Jan. 9-28. Clemson is in the middleof playing four out of five conference games on the road. Clemson,NC State, Virginia Tech and Florida State are the only league teamswho have to play four out of five ACC games on the road at anypoint in the season. Clemson has beaten a top 20 North Carolinateam 12 times, including three times since 1999. Clemson has sevenwins over top 10 Tar Heel teams and four wins over top five NorthCarolina teams. Clemson has more top 20 wins over North Carolinathan any other school. Of course, there have been moreopportunities than any other school. Clemson is shooting 49.6percent from the field at home and just 39.7 percent from the fieldon the road so far this year. Clemson is 7-1 at home so far thisyear with the only loss coming to Wake Forest. Freshman CliffHammonds leads all conference freshmen in scoring so far this yearwith a 10.1 average. The native of Cairo, GA who leads the team inplaying time had a 3.25 GPA in architecture in his first semesterat Clemson.

Among the other ACC teams, Clemson is 5-1 against Florida State, 4-2 against North Carolina, 4-2 against NC State, 3- 3 against Georgia Tech, 3-3 against Virginia, 1- 5 against Wake Forest and 0-6 against Maryland and Duke, in Littlejohn Coliseum over the last six seasons. So, Clemson has had its second highest success rate at home against North Carolina over the last six seasons.