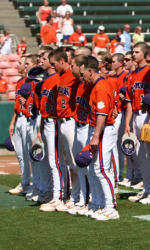 For Monday’s matinee, all middle school-and-under students will receive free admission. All businessmen and businesswomen will receive free admission by presenting their business card. All graduating Clemson students will be allowed to stand on the field during the playing of the National Anthem. Posters will also be distributed to all fans in attendance while supplies last.

In the three-game series at Shipley Field in 2008, the Tigers won the first and third games of the series, while Maryland won game-two 5-3. The two teams also played a three-game series at Shipley Field in 2007, as the Terrapins won two of three games. Neither team scored more than six runs in a game in any of those six contests in College Park. In 2006 at Doug Kingsmore Stadium, the Tigers swept Maryland by a combined score of 21-10.

The Starting Pitchers In game-one, Maryland will start junior righty Scott Swinson (3-6, 5.29 ERA) on the mound. The Ellicott City, MD native has made 10 starts and two relief appearances for a total of 63.0 innings pitched. He has allowed 75 hits (.298 opponents’ batting average) and 19 walks with 50 strikeouts.

Clemson will counter with sophomore lefty Casey Harman (5-3, 3.71 ERA) on Sunday. The South Burlington, VT native has made nine relief appearances and seven starts for a total of 51.0 innings pitched. He has given up 58 hits (.287 opponents’ batting average) and nine walks with 47 strikeouts.

In game-three, Maryland will start freshman lefthander Matt Fullerton (5-4, 6.13 ERA) on the mound. The Williamsport, PA native has made 10 starts and three relief appearances for a total of 39.2 innings pitched. He has given up 43 hits (.276 opponents’ batting average) and 14 walks with 26 strikeouts. He has also allowed just one homer.

The Terrapins Maryland, led by ninth-year Head Coach Terry Rupp, enters the series at #17 Clemson with a 22-24 overall record and 6-18 ACC mark after winning both midweek games this week. The Terrapins downed James Madison at home 17-10 on Tuesday, then they beat West Virginia 8-7 on the road on Wednesday. Maryland, who is 5-15 on the road, also was swept in a three-game series at North Carolina last weekend.

The pitching staff has a 5.87 ERA and .289 opponents’ batting average along with 332 strikeouts against 187 walks in 400.0 innings pitched. Junior righthander Dan Gentzler has a team-high five saves and a 3.03 ERA in 23 relief appearances. The Terrapins are fielding at a .968 clip as well.

The Tigers Clemson, ranked as high as #17 in the nation, enters the series against Maryland with a 30-15 overall record and 14-10 ACC mark after downing #4 Georgia Tech twice in three games at Doug Kingsmore Stadium last weekend. The Tigers, who had five days off for final exams, sport a 22-6 home record.

Polls The Tigers jumped three spots to #17 in the Sports Weekly coaches poll this week after going 4-1 in five games last week. Clemson also moved up to #19 in the Collegiate Baseball poll and #21 in the Baseball America poll after being unranked in those two polls last week.

ACC Standings The Tigers are in second place in the ACC Atlantic Division standings with a 14-10 record. Clemson is two games behind first-place Florida State, who is 15-7 in the ACC. Boston College is third with an 11-11 league mark. The Tigers also own the fifth-best record in the ACC standings among the 12 league members. North Carolina (16-7) has the ACC’s best record.

Ryan Hinson’s Appearances Senior lefthander Ryan Hinson (Rock Hill, SC) is Clemson’s only current player who traveled with the team during its last trip to the College World Series in 2006. In his four years as both a starter and reliever, he has made 77 appearances (26 starts). The 77 appearances are the 10th-most in Tiger history.

Tigers Win Series Over #4 Georgia Tech 2-1 Clemson, ranked #20 in the nation, won two of three games against #4 Georgia Tech at Doug Kingsmore Stadium from April 24-26. Clemson outscored the Yellow Jackets 18-13 and outhit them .302 to .286. The Tigers also had 19 walks, while Georgia Tech batters walked just eight times and struck out 23 times. Jeff Schaus went 8-for-13 (.615) with a double, homer, and four RBIs. The Tiger pitching staff had a solid 4.00 ERA against one of the nation’s top hitting teams as well.

In game-one on April 24, Georgia Tech scored all five of its runs in the third inning and outlasted Clemson 5-4. The Tigers jumped out to a 3-0 lead in the first inning on Brad Miller’s two-out, three-run double. But the Yellow Jackets scored five runs in the third, capped by Luke Murton’s two-run homer. The Tigers scored a run in the eighth inning, but they could get no closer. Clemson had just one run-scoring hit in 12 at-bats with runners in scoring position and stranded 11 baserunners, including six in scoring position. The Tigers also walked eight times and had eight hits. Schaus went 3-for-4 with one of the Tigers’ four doubles. The Clemson bullpen also pitched 6.2 scoreless innings.

In game-two on April 25, Schaus went 4-for-5 with a homer and four RBIs to lead Clemson to an 8-5 win over Georgia Tech. Schaus’ three-run homer in the third inning gave the Tigers the lead for good. Georgia Tech scored a run in the eighth inning and two runs in the ninth inning before Clemson shut the door. Clemson outhit the Yellow Jackets 12-10 and was 5-for-8 with runners in scoring position. Leadoff batter Casey Harman pitched 6.2 strong inning, allowing two runs with four strikeouts to earn the win.

In game-three on April 26, four Tiger pitchers limited the Yellow Jackets to three runs in Clemson’s 6-3 win over Georgia Tech. The Yellow Jackets scored two runs in the top of the first inning, but Clemson responded with three runs in the bottom of the first and never relinquished its lead. Trey Delk earned the win in a starting role after missing over a month due to injury, then Graham Stoneburner, Scott Weismann, who recorded his first career save, closed out the game. Wilson Boyd went 3-for-3 with two RBIs, while Freeman added two hits. Both teams had nine hits in the game. The victory was Jack Leggett’s 300th against an ACC team as Clemson’s head coach.