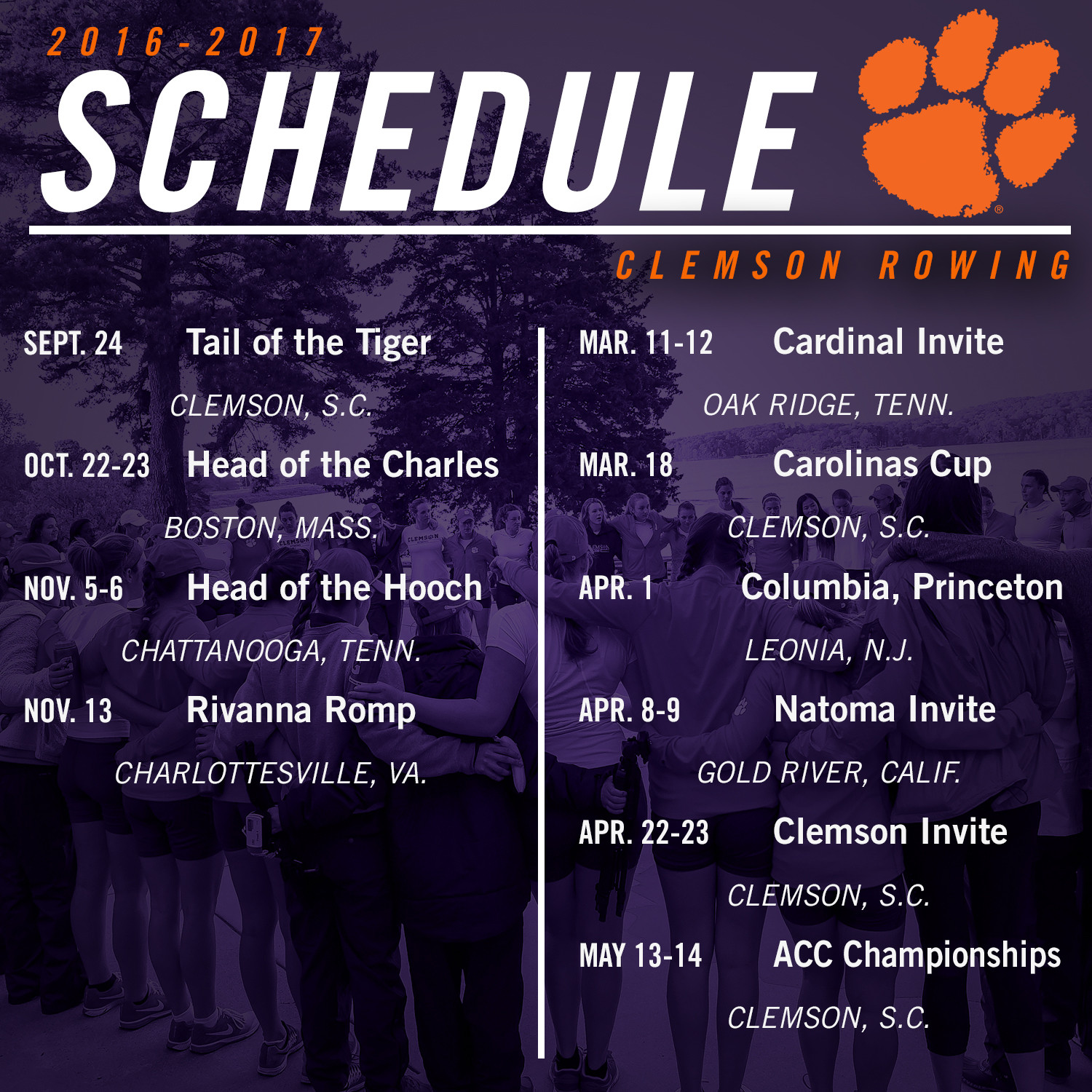 CLEMSON, S.C. — The Clemson rowing program announced its 2016-17 competition schedule on Friday. Third-year head coach Stephen Frazier Wong will compete his crews in four races during the fall and six in the spring.

“The number one goal of the program is to raise our level of toughness,” Frazier Wong said of the 2016-17 team. “We’re traveling to places we haven’t been before. We’re blessed with a venue that can hold some premium events, but we maybe get too comfortable here. We want to build that culture by traveling. Bringing a competitive mindset on the road with us is important. We want discomfort to make us better.”

The fall season features traditional trips to Massachusetts, Tennessee and Virginia for the Head of the Charles, Head of the Hooch and Rivanna Romp, respectively. Clemson begins the fall campaign at home on Saturday, September 24 as part of the Tail of the Tiger regatta.

The spring begins with a trip to Oak Ridge, Tenn., for the Cardinal Invitational on March 11-12. One of the highlights of Clemson’s spring slate is a trip to Gold River, Calif., on April 8-9 for the Natoma Invitational.

“We brought in our freshmen class of 2020 with the goal of helping us compete for a national championship during their Clemson tenure,” Frazier Wong said. “With the 2017 (New Jersey) and 2018 (Florida) NCAA Championships being held on the East Coast, we feel strongly that a return to the West Coast could be in the cards for 2019 or 2020.

“Much of the team has never raced in California before and we want to ensure that they, especially the freshmen who will be junior and senior leaders in 2019 and 2020, are familiar with one of the best courses in the country. We will also race crews from the West Coast that we haven’t seen before, including the 2016 national champion, Cal. We look forward to facing that level of competition before we head into the Clemson Invitational, which is once again stacked with many of the top teams in the country.”

The Tigers finish the year at home, April 22-23 for the Clemson Invitational and a few weeks later at the ACC Championships on May 13-14. This will be the eighth straight year Lake Hartwell has been the host venue for the conference championship.