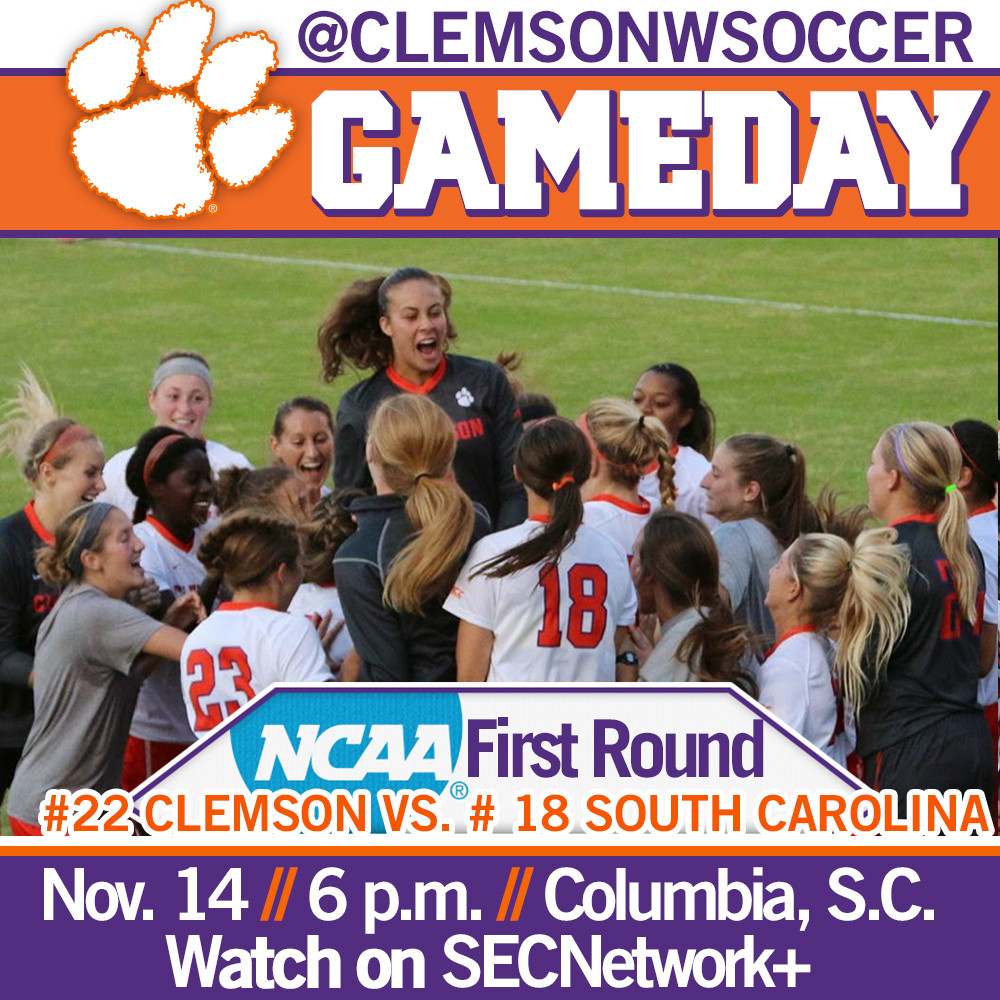 Tigers and Gamecocks Meet Friday Night in NCAA First Round

CLEMSON, S.C. – The Clemson women’s soccer team plays South Carolina Friday, Nov. 14 at 6 p.m. at Stone Stadium in Columbia, S.C in the first round of the NCAA Tournament. The game will be broadcast on SEC Network+. Tickets can be purchased through South Carolina’s Athletic Ticket Office by calling 800-472-3267 or at the gate beginning at 5 p.m. on gameday.

Clemson finished the regular season 13-3-2 and in fifth place in the ACC at 6-3-1. The Tigers have won five of their last six games, including a 2-0 win over NC State in their regular season finale on Nov. 1 at Historic Riggs Field. The Tigers are ranked 16th by TopDrawerSoccer.com, 21st by Soccer America and 22nd by the NSCAA.

Sophomore Catrina Atanda leads the team offensively. The midfielder has nine goals and 20 points on the year and was a Second Team All-ACC selection. However, 13 different Tigers have scored at least one goal this season and four have 10 or more points.

Sophomore Kailen Sheridan leads the Tigers in goal with 17 games played and over 1490 minutes in goal. She has 40 saves and has only allowed 10 goals, second fewest in the ACC regular season, and has posted seven solo shutouts. Sheridan was a First Team All-ACC selection this year.

South Carolina is a No. 3 seed in the tournament, and enters Friday’s game with a 13-5-3 overall record and a ranking of 18th according to the NSCAA. The Gamecocks were 5-3-3 in SEC regular season play and reached the semifinals of the conference tournament before falling to Texas A&M last weekend. Sophie Groff and Savannah McCaskill, both of whom have 15 points, lead the Gamecocks. Sabrina D’Angelo leads in goal with over 1917 minutes in goal across 21 games. She has 53 saves and 13 goals allowed and was named First Team All-SEC this season.

This is the first ever postseason matchup in between the two women’s soccer programs. Clemson has a 12-8-0 all-time record in the series against South Carolina, including a 5-5 record in matches played in Columbia. The Tigers’ fifth all-time win in Columbia came earlier this season, when the Tigers won a 1-0 contest at then-ninth-ranked South Carolina on Sept. 5. Freshman Shannon Horgan scored the game’s lone goal and sophomoreKailen Sheridan posted five saves and the shutout in goal.