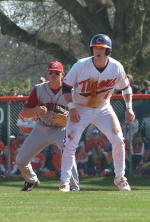 Clemson (25-8), ranked as high as #5 in the nation, will play host to #7 South Carolina (27-6) Wednesday at Doug Kingsmore Stadium in the final of four matchups between the two rivals this season. First pitch is scheduled for 7:07 PM. The Tigers have won two of the three previous games this year. The game will be televised live by CSS and broadcast live on the radio by Clemson Tiger Sports Network. Live stats will also be available at ClemsonTigers.com.

The SeriesClemson and South Carolina have met 274 times on the baseball diamond, with Clemson holding a 161-111-2 lead in the series dating back to 1899. South Carolina is Clemson’s most-played rival in history.

On March 4, South Carolina defeated the Tigers 6-2 at Sarge Frye Field behind the relief pitching of righthander Andrew Cruse, who tossed 5.2 scoreless innings of three-hit ball with seven strikeouts. A day later, Clemson was victorious 6-4 at Doug Kingsmore Stadium behind three hits by Taylor Harbin and two RBIs by Marquez Smith.

On April 5, Clemson edged the top-ranked Gamecocks 3-2 in Columbia behind the stellar relief pitching of Daniel Moskos, giving the Tigers a 2-1 series lead in 2006. Through the three meetings this season, Clemson is out-hitting the Gamecocks .277 to .247 and has a 3.46 ERA.

Bradley & Price Awards to Be GivenAfter Wednesday’s game, Clemson’s MVP of the four-game series will be given the Bob Bradley Award in a ceremony at home plate. Also, South Carolina’s MVP will be given the Tom Price Award. Both Bradley and Price served as Baseball SIDs at their respective schools for decades. Bradley passed away in 2000, while Price still serves as the official scorer for Gamecock baseball games. Price will be working on the South Carolina radio network broadcast during Wednesday’s game.

Taylor Harbin is hitting a team-best .462 (6-for-13) against the Gamecocks in the season series. He also has two doubles. Daniel Moskos has pitched 8.0 innings, allowing two hits and one run along with a 1-0 record.

Among South Carolina’s leaders in the series include Neil Giesler, who is 5-for-10, and Robbie Grinestaff, who is 3-for-10 with two homers and three RBIs. His two long balls are the only two that have been hit in the season series. Righthander Andrew Cruse, who is scheduled to start on Wednesday, pitched 5.2 scoreless innings of three-hit ball with seven strikeouts to earn the win on March 4.

The Starting PitchersSouth Carolina will start sophomore righty Andrew Cruse (3-0, 1.91 ERA) on the mound Wednesday. The Cornelius, NC native has made one start and eight relief appearances for a total of 28.1 innings pitched. He has allowed 22 hits (.208 opponents’ batting average) and nine walks with 29 strikeouts.

The Tigers will counter with sophomore righty David Kopp (1-0, 5.40 ERA) on Wednesday. The Margate, FL native has made four starts and four relief appearances for a total of 20.0 innings pitched. He has yielded 25 hits and eight walks with 15 strikeouts. It will be his second career start and fourth career appearance against the Gamecocks.

The GamecocksSouth Carolina, led by 10th-year Head Coach Ray Tanner, enters Wednesday’s game with a 27-6 overall record and 9-3 SEC mark after losing two of three games at home to #10 Alabama. The Gamecocks are ranked as high as #7 in the country and have a 5-2 road record. Each of their last seven games and 10 of their last 11 have been against teams ranked in the top 15 in the nation.

Offensively, the team is hitting .307 with a .403 on-base percentage, 41 home runs, and 155 walks against only 163 strikeouts. The team has swiped 16 base in 27 attempts and has 30 sacrifice bunts as well. Neil Giesler has a team-best .408 batting average along with three homers and 27 RBIs. Robbie Grinestaff has 11 home runs and 41 RBIs, both team-highs.

The pitching staff has a 2.96 ERA and .209 opponents’ batting average. Shawn Valdes-Fauli has a team-high three saves. Wynn Pelzer has been superb out of the bullpen as well, as he has a 3-0 record, 1.32 ERA, and two saves in nine appearances (seven in relief). The Gamecocks have one of the nation’s best defenses, as they have gone 10 straight games without committing an error. Overall, they sport a remarkable .987 fielding percentage, committing just 16 errors in 33 games, and have turned 33 double plays. No player has more than five errors.

The TigersClemson enters Wednesday’s game with a 25-8 overall record and 9-3 ACC mark after defeating Western Carolina 8-3 in Cullowhee on Tuesday. Clemson sports a 19-3 home record. The Tigers are also 11-0 when not committing an error and 24-1 when totaling at least as many hits as the opponent.

The pitching staff has a 2.80 ERA and .238 opponents’ batting average. Lefty Daniel Moskos has a team-high five saves and a 1.26 ERA in 16 relief appearances. Clemson is fielding at a .966 clip as well.

Worth Noting* Clemson has won 14 of its last 16 games.

Tigers Homer Past Catamounts 8-3Clemson hit three homers and Marquez Smith added two hits, including a solo home run. The big blow came in the fifth inning off the bat of Colvin, who smacked a three-run homer after Catamount third-baseman Jonathan Greene dropped a pop-up in the infield that would have ended the inning. Zocchi allowed just three hits and one unearned run to earn the win, while Daniel Moskos retired all five batters he faced to record the save. Prior to the game, former Western Carolina star Keith LeClair, who played and later coached under Jack Leggett, had his #23 jersey retired. LeClair, who suffers from A.L.S., was in attendance for the heart-felt ceremony in which Leggett spoke at.