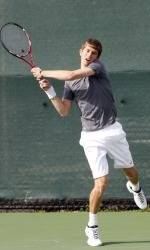 TULSA, OK–Clemson Tennis player Yannick Maden won his first match in the first round of the ITA All-American Tournament Qualifying Tournament on Monday.

Maden defeated Jeremy Efferding of Texas A&M 6-3, 6-1 on Monday. He will play Marko Krickovic of Baylor on Tuesday.

Maden is ranked 74th nationally in singles according to the latest ITA poll. He is seeded 17-32 in this 128-player field.

In doubles play, Maden and Zachary Rigsby received a first-round bye and will start play in the second round on Tuesday.

In doubles, Maden and Rigsby are ranked 46th nationally as a doubles team. They are seeded 11th in this tournament.