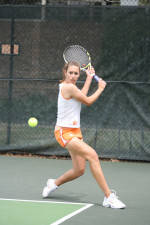 CLEMSON, SC – The 12th-ranked Clemson women’s tennis team will head to Florida for a pair of matches during the university’s spring break. The Tigers (8-5, 1-1 ACC) will take on #24 Florida State on Sunday afternoon in Tallahassee, FL before stepping out of conference play to face Central Florida on Monday afternoon in Orlando.

The Tigers and Seminoles will begin play at 12:00 pm at the Scott Speicher Tennis Center, while Monday’s match is set for a 2:00 pm start at the UCF Tennis Complex.

Florida State dropped its first two ACC matches of the year to Georgia Tech and Miami to fall to 7-4 overall. Noemi Scharle has made an impact on the Seminole squad after joining the team for the spring season. She is 7-3 in singles play and is ranked 38th in the latest Campbell/ITA Tennis poll.

Clemson has won the last seven meetings with Florida State and holds a 24-8 all-time advantage in the series score. Last year, the Tigers defeated the Seminoles by a 5-2 margin in Tallahassee. Florida State’s most recent win in the series came during the 2000 season.

Central Florida currently sits at 7-4 on the year and will face Penn State on Saturday afternoon before playing host to Clemson. Monday’s match-up will be the first meeting in history between the Tigers and Knights.