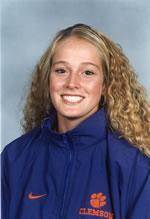 CLEMSON, SC – The Clemson women’s cross country team will travel to Winston-Salem, NC, to compete at the 2003 ACC Championships on Nov. 1. The starting time for the 6k women’s race is 11:00 AM, and admission to the Cross Country Championships will be free of charge. Each race will begin and end on Water Tower Field which is located directly inside the University Parkway entrance to Wake Forest. On campus parking will also be available for the event.

At last year’s ACC Cross Country Championships, Wake Forest and NC State shared the women’s title. This year, five of the ACC’s nine women’s teams are ranked nationally in the top 30. Clemson finished ninth at last year’s Championships. Casey Phillips led the Lady Tigers with a time of 24:21.9 over the 6K course, while Laura Ann Rukat was Clemson’s number-two runner (24:54.4). Jennifer Barton covered the course in 25:34.7 a year ago, and Jennifer Hooten posted a time of 26:05.0.