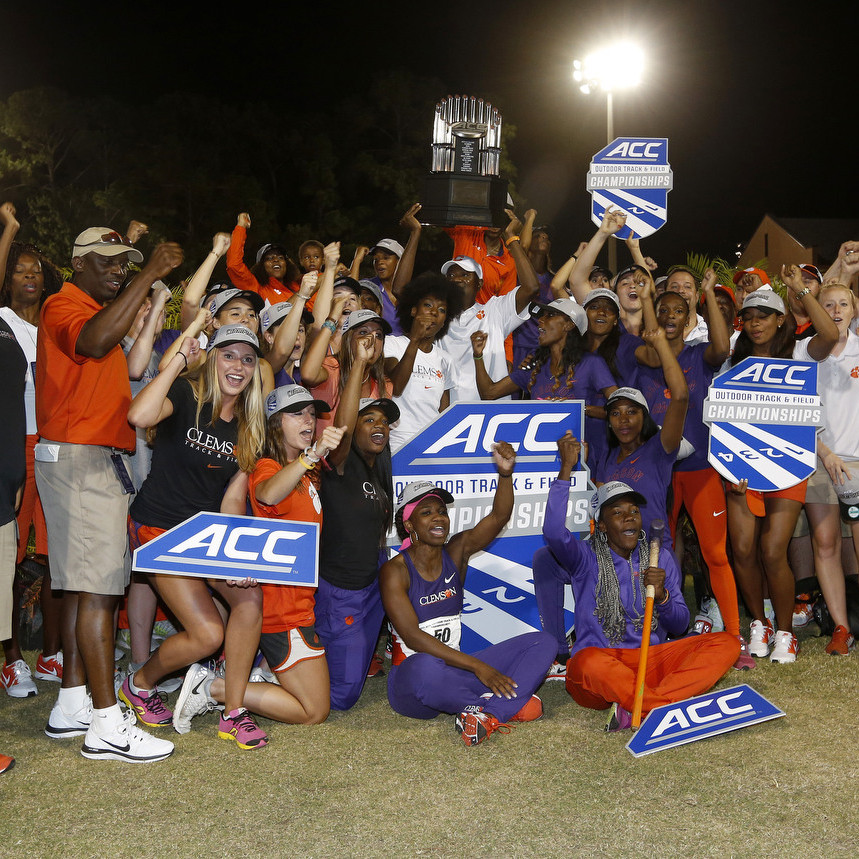 CLEMSON, S.C. — Behind the strength of a podium sweep in the triple jump and three wins in the running events, the Clemson women won the 2015 ACC Outdoor Championship on Saturday at Florida State’s Mike Long Track. The Tigers held off the home-standing Florida State Seminoles, who won the men’s title.

“Clemson is used to winning championships,” said Head Coach Mark Elliott. “We expected to win, and our athletes stepped up to the challenge.”

The Tigers posted individual wins in the 100, 800 and triple jump, in addition to the 4×100 relay. Sabria Hadley came up huge for the Tigers, winning the 100 and taking silver in the 200 with personal bests in both. Hadley’s times rank among the top six in Clemson history in both.

Natoya Goule pulled off a miraculous double, taking fourth in the 400 dash before returning to the track less than an hour later for the 800. She broke the ACC Championships and Clemson records in the event, with a time of 2:01.32.

Iana Amsterdam repeated as triple jump champion after winning the indoor crown. She bested her previous outdoor mark with a winning leap of 42-11.75, No. 5 in Clemson history. Anasterasia Terrell (42-7) and Whitney Fountain (42-2) were second and third, respectively.

The Tiger men finished in fourth place, a seven-spot jump from their position at the 2014 ACC Outdoor Championships. Clemson claimed four event championships, most by the men’s program since the 2007 season.

Tevin Hester was dominant for the Tigers, winning both the 100 and 200, while helping the 4×100 relay to a runner-up finish. Hester posted an all-conditions school record in the 100 dash with a blistering 9.87, a slightly wind-aided time. He then ran a personal best 20.18 in the 200, moving to No. 3 on Clemson’s all-time chart. He was named Meet MVP for his efforts, his second such honor this season.

Shai Carpenter bagged his second career All-ACC honor in the triple jump in his final conference meet. The Upstate South Carolina product broke the school record with a leap of 52-4. He placed third, while teammate Ishmael Kamara was fifth with a personal best 51-2.75.