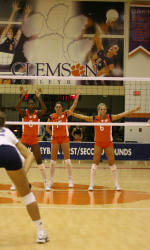 CLEMSON, SC – The Clemson volleyball team will travel to Iowa for the UNI Invitational this weekend. The Tigers (2-1) will take on Marquette (1-2) on Friday at 6:00 pm (EST) in their first match of the weekend. Clemson and Norhern Illinois will meet at 11:00 am on Saturday before the Tigers and host Panthers clash in the tournament finale at 8:30 pm that night. Livestats will be available for all three matches with links available at www.clemsontigers.com.

Senior Danielle Hepburn leads the Tiger offense with 41 kills through the first weekend of play for a .342 hitting percentage. Junior Lia Proctor had a strong tournament as well with 37 kills, while her classmates Didem Ege also started the season well. Murphy tallied 106 assists in 10 sets and Ege recorded 42 defensive saves.

Against The Field Clemson has played just three matches in history against the UNI Invitational Field. Friday evening’s match-up with Marquette will be the first meetIng between the two schools. The Tigers won the only prior contest with Northern Illinois, defeating the Huskies by a 3-1 margin at a neutral site in 1995. Clemson will then match-up against the host Panthers for just the third meeting ever. Northern Iowa was the battle during the 2006 season with a 3-2 victory in West Lafayette, IN. The Tigers had upset the then-ranked #21 Panthers, 3-1, at the 2004 Big Orange Bash in Clemson, SC.

Scouting The Opposition Northern Iowa enters its own tournament with a 3-0 record after claiming the Florida Atlantic Invitational last weekend. Shannon Aschoff led the Panthers with 41 kills and a .507 hitting percentage while Ellie Blankenship totaled 60 digs in the event.

Northern Illinois posted wins over Chicago State and Cleveland State before falling to Connecticut in the NIU Invite over the Aug. 29-30 weekend. The Huskies also suffered a loss at Illinois State in a mid-week contest to sit at 2-2 on the year. Meaghan Schoenrock owns team-high figures in kills and digs.

The Golden Eagles went 1-2 in the Marquette Kickoff last weekend with their lone win coming against Chattanooga. Ashlee Fisher totaled 44 kills in the three matches to lead the squad.