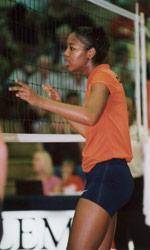 CLEMSON, SC – The Tiger volleyball team will play host to its first home match of the 2003 season on Wednesday, Sept. 3 against Furman at 7:00 p.m. in Jervey Gym.

The Tigers boast a 30-0 all-time record against the Paladins, a 15-0 record against Furman in Jervey Gym and an 86-24 overall mark against teams in the Southern Conference. Over the last six seasons, the Tigers have posted a 65-24 record in Jervey Gym, including a 12-4 mark during the 2002 season. Clemson is 20-6 all-time in home openers, and under head coach Jolene Jordan Hoover the Tigers are 9-1 all-time, with the only loss occurring during the 2001 season against Wright State.

Clemson has an 0-3 overall record entering the Furman match after opening their season at the Barker GMC Classic in Normal, IL. The Tigers lost their season opener to #7 Nebraska 3-0 and then lost two hard fought matches to Illinois State and Illinois on the second day of the tournament. Clemson dropped a 3-1 decision to the Redbirds on Saturday morning and then fell to Illinois 3-1 later that night.

The Paladins are 0-3 entering Wednesday’s match, after falling to DePaul (3-0), Morehead (3-0) and IUPUI (3-0) at the Morehead State Invitational last weekend. Julia Fredrickson leads Furman with 25 kills and seven total blocks, while Whitney Purser leads the team with 27 digs with a 3.38 digs per game average. Michelle Cauldwell has recorded 58 assists, and Molly Rybak has handed out 41 assists.

Admission to all Clemson home volleyball matches at Jervey Gym is free to the public.