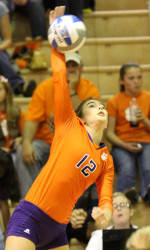 GREENVILLE, SC – The Clemson volleyball team opened its spring scrimmage season with a 3-1 (23-25, 25-21, 25-16, 25-11) win against Furman at a packed Alley Gym in Greenville, SC. Kristin Faust led the Tigers with 12 kills, while libero Natalie Patzin collected an impressive 24 digs in the four-set match.

Other top performers in the match for the Tigers included Serenat Yaz, who had 11 kills and 9 digs, and Mo Simmons, who tallied five kills, six blocks, and nine digs. Two of her kills closed down sets.

The Tigers will play host to Georgia on April 4 at 6:00 pm in Jervey Gym in a free exhibition. Clemson returns all but one starter from a the 2011 season when they went 20-11, and graduated just one senior.