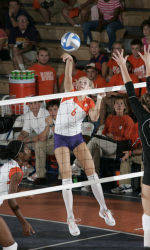 The Cavaliers’ Sarah Kirkwood tallied 22 kills for a .314 hitting percentage, while Katie Oaks, the ACC’s leading blocker, tabbed six in the contest.

The Tigers recorded the first rally of the match, scoring four straight points to go ahead 15-12 in game one. Clemson then rattled off a seven-point run to take a commanding 23-13 lead. Virginia then posted eight of the next nine points to narrow the gap to 24-22. The Cavaliers came within one point of the Tigers at 25-24 and again at 26-25. However, Clemson scored the next two points and closed out the game, 30-26, on a kill by Abbott and a Virginia error.

The Cavaliers took the second game in the match, the first game the Tigers had dropped since their Sept. 29 contest against Miami, to tie the score at 1-1. After leading 16-13 in the game, Virginia put together two four-point plus rallies to go ahead 25-14. Clemson fought back and avoided two game points to cut the deficit to seven. The Cavaliers went on to claim the game, 30-22.

Runs from both teams dominated the fourth game with the Cavaliers holding out in the end, winning 34-32. Clemson had a six-point rally to take an early 10-8 lead before Virginia scored four straight points of its own to go up, 12-10. The Tigers then scored five of six points in a stretch later in the game to regain the lead at 19-16. However, the Cavaliers’ turn was next as they went ahead 23-20 after a five-point run. Then the game became a back-and-forth affair, seeing six tie scores (26-26, 27-27, 29-29, 30-30 and 32-32), and Virginia tallied the final two points for the victory.

Clemson will remain in the State of Virginia for a Sunday match-up against the Hokies of Virginia Tech. The contest is slated for a 1:00 pm start time at Cassell Coliseum in Blacksburg.