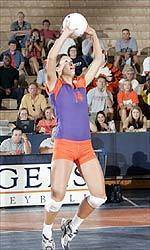 Tiger Volleyball Falls To Miami In Five Games On The Road

CORAL GABLE, FL – The Clemson volleyball team suffered its first conference loss of the 2005 season at the hands of the Miami Hurricanes on Friday night in Coral Gables, FL. The Hurricanes pulled out the five-game thriller for their seventh win overall and second conference victory of the season, while the Tigers fell to 7-4 overall and 2-1 in ACC play. Clemson had a 2-1 advantage entering the fourth game but was unable to hold onto the lead as Miami won games four and five.

Miami won the first game by a score of 30-25. Abbott had five kills during the game for the Tigers. Clemson responded with a win in game two. The Tigers led for much of the game but the Hurricanes tied the score at 28-28 and then took a 30-29 lead. Clemson scored the next three points, two of which on service aces by Dawn Robertson, to tie the match at one win apiece.

Game three proved to be just as hard-fought as the first two. After a back-and-forth beginning, the Tigers recaptured the lead at 26-24 and went on to win 30-28 on an Abbott kill. Clemson was ahead early in the fourth game but was unable to hold the lead as the Hurricanes took the game, 30-25, to force a fifth game. Miami then defeated the Tigers in the final game by a score of 15-8 to post the victory.

Clemson will face Florida State on Sunday, Oct. 2 at 1:00 PM in Tallahassee, FL. Fans can follow the action via livestats on www.clemsontigers.com or they may access a live audio feed at http://seminoles.collegesports.com/multimedia/volleyball2005.html.