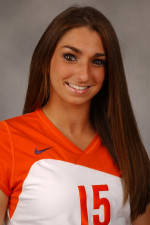 CLEMSON, SC – The Clemson volleyball team suffered a 3-2 defeat to South Carolina on Thursday night in the 2006 Big Orange Bash opener. With the loss, the Tigers fall to 1-3 on the year, while the Gamecocks improve to 4-1 overall. Friday’s tournament action will begin at 9:00 am as South Carolina takes on Charlotte. Clemson will face Western Carolina at 11:30 am and will then take on Tennessee State at 7:30 pm. The Gamecocks and Tennessee State Tigers will battle at 2:00 pm, while Western Carolina and Charlotte will meet at 4:30 pm. All matches will be held at the Jervey Gymnasium.

The Gamecock’s Shonda Cole led all hitters with 36 kills in Thursday’s match, accounting for nearly fifty percent of South Carolina’s 76 total kills. She also led the team in hitting with a .467 mark, committing just eight errors in 60 attempts.

The Gamecocks eked out the win in the first game, as Clemson battled back from a seven point deficit to come within one point of South Carolina at 22-21. However, the Gamecocks maintained their lead and clinched the 30-25 victory on a kill by Belita Salters.

The Tigers, led by Jeannette Abbott seven kills, then claimed the second game by a score of 30-22. Clemson distanced itself from the Gamecocks with a five-point rally that put the Tigers up, 25-19. After a Cole kill, Clemson scored three points and went on to win the game.

In game three, the Tigers used two early three-point rallies to take a lead that South Carolina could not overcome. Steiner, Abbott and Hepburn each recorded four kills to help Clemson post the 30-24 victory and take a 2-1 lead in the match.

However, the Gamecocks responded with a win in game four to force the fifth game. The Tigers held an 8-6 advantage in the final game, but a kill by Cole put South Carolina ahead 10-9. The Gamecocks then went on to win the game, 15-13, and the match.