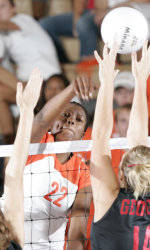 RALEIGH, NC – The Clemson volleyball team overcame the absence of head coach Jolene Jordan Hoover, who is taking care of family matters, and an injury to starting setter Courtney Lawrence to defeat the N.C. State Wolfpack, 3-2, Friday night at the Reynolds Coliseum in Raleigh, NC. Back-up setter Dawn Robinson, who is also nursing an injury, got the start for the Tigers and recorded 50 assists for the team, while Leslie Mansfield tallied 14 set assists in the first setting assignment of her career. With the win, Clemson improved to 9-6 overall and 4-3 in the ACC, while the Wolfpack dropped to 6-10 on the season and 0-8 in conference play. Clemson posted 11 total team blocks and hit .269 with 82 kills in the match.

Brittany Ross led the way for the Tigers as she set a career high with 26 kills, including six in the final game. Jeannette Abbott also recorded 23 kills for Clemson and Meghan Steiner added 15 in the effort, which was also a new career high. Stefani Eddins, the ACC’s leading hitter, tallied 23 kills in the match and hit .386 for N.C. State.

It was a close, hard-fought fifth game, but Clemson came out on top, 15-13. The score went back-and-forth for the first half of the game before the Wolfpack scored five straight points for a 12-9 advantage. The Tigers responded with four consecutive points of their own to go up, 13-12. N.C. State scored its 13th point on Aiwane Iboaya’s 14th kill of the night, but it would be her team’s last. Clemson scored the final two points of the match on a Ross kill and a solo block by Abbott for the victory.

The Tigers came out strong in the third game, never relinquishing the lead as they claimed the game, 30-22. Clemson’s final point came on a kill by libero Anna Vallinch after Abbott kept the volley alive with a free-ball from the corner of the gym. Vallinch also served the last five points for the Tigers. N.C. State won game four by a score of 30-25 to tie the match at 2-2 and force a fifth game.

Clemson will face North Carolina on Saturday, Oct. 15 in Chapel Hill. The teams will take to the court at 6:00 PM at the Carmichael Auditorium. Livestats will be available on www.clemsontigers.com.