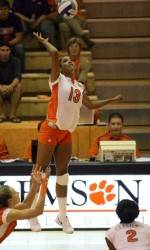 Didem Ege had 17 digs to lead the Tigers, and now needs just 20 to set the league career digs mark. Kelsey Murphy had 50 assists, and needs just 17 in tomorrow’s match to reach the 5,000 mark for her career. Freshman Alexa Rand had an excellent night, recording nine kills and no errors for a .529 hitting night.

Clemson jumped out to an 11-4 edge in the first set behind three kills from Adeleye and Rand. Florida State responded with a run to pull within one point at 18-17 and 19-18, but Clemson went on a 4-0 run to take a 23-18 edge. Florida State scored the next three points, but a kills from Natalie Patzin and a Stephanie Neville attack error gave Clemson a 25-21 set win. Adeleye and Rand each had five kills in the set, and the team recorded four blocks as they hit .344.

Florida State evened the match at one apiece behind hot hitting of their own, with a .324 mark for the set. Brianna Barry had eight kills through the first two sets, as the Seminoles recorded four service aces against the conference’s stingiest service defense. Florida State turned an 11-10 deficit into a 14-11 lead and we able to maintain the cushion throughout the set, rattling off the final three points for a 25-19 win.

Florida State opened the third set hot as well, coming out to a 12-6 lead. Clemson responded with a 3-0 run to pull within three, but a 6-1 Seminole run game them an eight-point working margin. Proctor led the Tigers back to within three at 20-17. A kill from Brianna Barry, the league’s leading hitter, opened a four point edge, and the Noles went on to win, 25-19. The Tigers had a five-match winning streak snapped in the process.