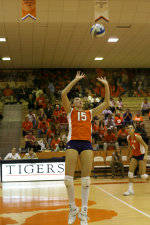 The match concluded Clemson’s regular season play, and the Tigers will await word from the NCAA tournament selection committee about a possible at-large berth. The selection show will air at 10:00 pm (Eastern) on Sunday night on ESPNU. Clemson finished third in the ACC standings after winning the tie-break over Miami, who also tallied a 14-6 conference record in 2008.

Kelsey Murphy turned in one of the best efforts in her career, falling just a block shy of her second career triple-double (50 assists, 11 digs, 9 blocks,6 kills). She led the Tigers to a .320 hitting night.

“I cannot say how much Kelsey means to this team, the way she plays and directs our offense. She had another outstanding night and has emerged as one of the leaders on this team,” said Head Coach Jolene Jordan Hoover.

The Tigers only committed five errors in the final three sets combined. Danielle Hepburn ended the night with 18 kills in 33 chances, while Jeannette Abbott ended with 18 kills and 11 digs. Didem Ege led the Tigers with 23 digs.

Hepburn improved her season hitting percentage to a .397 clip with Friday’s performance, which will stand as a school record should Clemson not earn a bid to the NCAA Tournament.

“Georgia Tech is always such a close matchup for us,” said Hoover. “The second set really could have gone either way, and I was happy to see us battle back for this win in a tough environment. I was very pleased with how we played in the final three sets, and we certainly closed out strong.”

Clemson came out on a tear to start the deciding fifth set. Two kills from Danielle Hepburn and two blocks and a kill from Jeannette Abbott kills and a Lisa Jedlicka kill put the Tigers ahead 12-4 in the first-to-15 set. Another Abbott kill, a block from Ozdemir and Jedlicka, and an attack from Allie Campbell sailed over Abbott’s head to close the match.

In the first set, the Yellow Jackets jumped out to a 13-6 advantage fueled by eight Clemson errors, including three of the service variety. The Tigers fought back to bring the match to 22-16, but Chrissy DeMichelis recorded her sixth and seventh kills of the set to put the Tigers away, 25-18. The Jackets hit at a .324 clip, while holding Clemson to a .226 margin. The Tigers had 11 total errors in the set, while the Jackets only had five. Danielle Hepburn recorded six kills in the set to lead Clemson.

The second set was efficient for both sides. The Tigers recorded a kill on eight of their first 11 attempts to take a 10-6 lead. The Tigers didn’t record an error until their 20th attempt. The Tigers were able to keep a working margin of no more than two points throughout most of the game, as the two teams traded kills.

The Jackets tied the set at 19 apiece, but the Tigers scored three of the next four to take a 22-20 lead. However, Georgia tech fought back to score four of five to take a 24-23 lead. Following a service error by Tech, an Alison Campbell kill gave Georgia Tech the 25-24 edge. The Tigers tied it up on an error by Callie Miller. A block by Miller and Allie Niekamp gave the Jackets a one-point edge and they clinched the set when a Hepburn attempt hit the net.

For the set, the Jackets recorded a remarkable 23 kills in 27 points against only six errors. The Tigers had 16 kills on 40 attempts against only four errors, but it was ultimately not enough, as Georgia Tech took a 2-0 lead into intermission by a 27-25 count.

In the third set, each team struggled to get an advantage as there were 9 ties in the first 11 points. With the score knotted at 11, the Tigers went on a 4-0 spurt, led by two kills from Jeannette Abbott. After a Miller kills brought the score to 16-14, Hoover called a timeout to regroup, and the Tigers responded to take a 23-18 lead on a pair of blocks and a Tech error. The Tigers closed out the set on a kill from Abbott, who recorded six in the set. The Tigers won the set 25-21, making only two errors, while holding the Jackets to a .132 mark.

The Tigers came out strong in the fourth set, going on an 8-2 run to take a 10-4 lead. After a Tech rally brought the score to 11-7, the Tigers went on a 7-0 run to take an 11-point edge at 18-7 behind a block and an ace from Cansu Ozdemir and two kills and block from Proctor. The Tigers were able to hold the edge from there, closing out the set 25-11 to knot the match score at two. The Tigers held Georgia Tech to -.031 hitting in the set with 10 errors, while hitting .529 and recording only one error themselves.