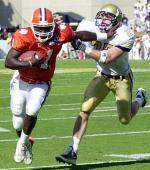 Clemson has won each of the last two games against Georgia Tech played in Atlanta between the two schools and has scored 86 points in the two games combined. In 2003, the Tigers won 39-3, largest margin of victory over the Yellow Jackets since 1903. In 2001, the Tigers recorded a 47-41 overtime victory. The win over the Yellow Jackets was Clemson’s first against Tech since 1996, and continued an unbelievable streak of six straight years in which the annual contest between these schools has been decided by three points. You can watch video highlights from both games now on Tiger Tracks Flashbacks.