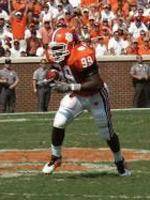 The Clemson defense held strong in the fourth quarter and thwarted all comeback attempts in a 33-13 victory over Louisiana Tech. The win was sealed by defenseive end Maurice Fountain, who made his first career interception. “Mo” showed his athletic ability by dropping into coverage, picking off the pass, and then motoring 43 yards down the sideline to set up the Tigers’ final touchdown.

This file is approximately 3.0 MB