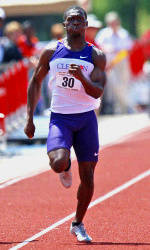 CLEMSON, SC – The Clemson track & field program will send 33 student-athletes – 18 members from the ACC championship and No. 3 ranked women’s team and 15 from the Tiger men’s squad – to compete Thursday through Saturday at the NCAA East Preliminary Round in Jacksonville, FL. The top 48 individuals and top 24 relays in the East and West (Austin, TX) qualified for this weekend’s meets. From there, the top 12 individuals and relays move on to the NCAA Outdoor Championships in Des Moines, IA from June 6-9.

The meet will be streamed live on the University of North Florida’s home page for the event at UNFospreys.com. Live results will also be available at FlashResults.com. The meet will take place at Hodges Stadium.

The Clemson women’s team enters the week with a No. 3 national ranking and with 28 entries, second-most of any school in the country. Only Oregon (34) has more entries in the first and second rounds. The Tigers have been no lower than fifth during the 2012 outdoor season, and ranked No. 1 in the country in two separate polls.

Six members of the Tiger women’s squad will compete in multiple individual events, led by Jasmine Edgerson and April Sinkler in three apiece. Edgerson is scheduled for the 100, 200 and 100 hurdles. Sinkler qualified in the high jump, long jump and triple jump for the second consecutive season. The others slated for multiple events this weekend are Dezerea Bryant (100/200), Monique Gracia (100/100 hurdles), Keni Harrison (100 hurdles/400 hurdles) and Kim Ruck (5000/10,000).

Clemson has two females atop the East leaderboard entering this week’s competition, Marlena Wesh in the 400 dash and Alyssa Kulik in the steeplechase. The Tigers also qualified both relays, the third-ranked 4×100 team and fifth-ranked 4×400 squad.

The men’s team has three athletes slated for double duty, sprinters Warren Fraser and Justin Murdock, and middle distance standout Aaron Ramirez. It will be the second straight year Fraser and Murdock both qualified for two individual sprints at the NCAA East Prelims. Ramirez will compete in the 800 and 1500 meters in his first appearance.

Spencer Adams is the highest-ranked member of the men’s team in any single event. He enters the East Prelims with the third-best seed time in the 110 hurdles, clocking a 13.39 in the ACC final last month. He was an indoor All-American in the high hurdles. He will be joined by three additional hurdlers – Elijah Britton, Marcus Maxey and Charlton Rolle – in the qualifying round Friday.

Five male athletes will compete in the field events this week, starting Thursday at 1:00 PM with Jameel Abdul-Mateen in the long jump. Shai Carpenter is slated for the triple jump Friday, while Torian Ware (high jump), Marcus Brown (shot put) and Cory Thalheimer (shot put) will all compete on Saturday.