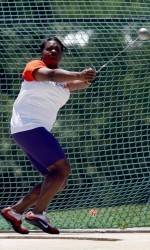 CLEMSON, SC – The Clemson track & field teams will make the short trip south to Atlanta to compete in the Georgia Tech Invitational on Friday and Saturday. The meet, held at the George C. Griffin Track Complex, will serve as the final chance for several student-athletes to earn their way to the NCAA East Preliminary Round meet in Greensboro, NC on May 27-29.

Under new rules adopted for the 2010 outdoor season, the four-region format used for the past seven seasons to determine qualifiers for the NCAA Championships no longer exists. Instead, the top 48 individuals and top 24 relay teams – based on marks achieved during the 2010 season – qualify for the NCAA Preliminary Round. The first and second rounds will be held at two locations – Greensboro (East) and Austin, TX (West). The semifinals and finals of the NCAA Championships will be June 9-12 in Eugene, OR.

Clemson has multiple contenders that can earn spots in the NCAA East Preliminary field by performing well across various events this weekend. On Friday, several competitors need to improve their existing top-48 times to secure a place among the field in Greensboro. Warren Fraser holds a season best 10.48 in the 100 meter dash. He competes at 7:25 PM to try and shave some hundredths off his time. In the women’s steeplechase, both Stephanie Buffo and Alyssa Kulik hope to improve their personal bests at 9:00 PM.

Several competitors are on the verge of the top 48, but need season-best performances this weekend to earn possible bids to the NCAA East Prelims. Brittney Waller, a freshman from Greenville, looks to move her way up the national descending order lists in both the hammer (Friday, 12 PM) and discus (Saturday, 1 PM).

Jasmine Brunson and April Sinkler are solidly in the top 48 for the long jump, but red-shirt junior Patricia Mamona hopes to join them in the field after Friday’s event at 7:00 PM. Miller Moss is firmly in the field in the decathlon, but coaches are hopeful he can qualify as a top-48 athlete in the 110m hurdles (Friday, 6 PM) and 400m dash (Saturday, 3 PM).

Stormy Kendrick and Kristine Scott have posted strong times in the 100m dash, but freshman Jasmine Edgerson remains on the outside looking in. She will have a chance to enter the top 48, with the 100m trials set for 6:55 on Friday. Kendrick, Scott and Michaylin Golladay are solid in the 200, but all three are entered this weekend in hopes of improving their seed times.

Several men’s sprinters have an opportunity Saturday to jump into the mix for top 48 slots. Jordan Rispress looks to improve his time in the 400 hurdles, which will be held at 4:10 on Saturday.