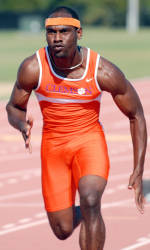 Tiger Seniors to be Honored Saturday at Orange & Purple Classic

Clemson, SC – The men’s track & field program will honor seniors Matt Clark, Mitch Greeley, and Cowin Mills on Saturday at the Orange & Purple Classic, the final home meet of their four-year careers at Clemson. The first men’s event Saturday will be at 10:00 AM with the hammer throw. The first running event is scheduled for 12:00 noon.

Clark is a six-time All-ACC performer in track and two-time all-conference runner in cross country. He was 2007 league champion in the 10,000m. He also holds the Clemson record in the 10K event, which he set earlier this season with an NCAA provisional qualifying effort at the Stanford Invitational. Clark will compete Saturday in the 1500m run at 1:05 PM.

Greeley has re-written Clemson’s record books in the pole vault. The Rock Hill, SC native is a three-time NCAA All-American, including a runner-up finish at indoor nationals in March. He went over the 18-foot mark for the first time in his career during indoor season, and will be attempting to break the facility record Saturday at 3:00 PM. The standard of 18’1.75″ was set by Virginia Tech’s Brian Mondschein in 2006. Greeley is also a three-time ACC champion and eight-time all-conference performer in the vault.

Mills has been an integral part of Clemson’s success in the relays, especially the past two seasons. He won All-America honors in 2007 after helping the 4x100m relay team to a seventh-place finish. He also was ACC champion for the first time in 2007, having run first leg for the Tigers’ 4x400m relay. This season, he ran third leg with Clemson’s ACC championship 4x100m relay and has qualified for regionals in four events. He will compete in the 400m (2:15) and 200m (3:40) on Saturday.

The senior class will not be the only notable competitors for the Clemson men this weekend. The Tigers plan to run an exciting 4x100m relay team of C.J. Spiller, and Travis Padgett. That event will be held at 12:45 PM. Guy, Padgett, and Spiller will also run the 100m dash at 2:35 PM. Padgett has already qualified for regionals, but Guy and Spiller need to pick up their times slightly in order to run in the event May 30-31 in Tallahassee, FL.

In the hammer, Alex Padgett needs to improve on his personal best by just a few inches in order to surpass the regional standard. He was fourth place in the event at the ACC Championships, one spot behind teammate Zach Berg who owns a regional mark. Both will compete in the event Saturday morning.

Scott Pauga is entered in the javelin at 11:45 and is two weeks removed from a personal best throw of 192’1″ at the ACC Championships. The long jump will be held at 1:00 PM. Regional qualifier George Fields should be the favorite to win, and will receive competition from teammate Mike Feathers.

The final events for Clemson in the field will be at 3:00 PM, the pole vault and triple jump. Joey O’Rourke will join Greeley in the vault, while Moss will compete in the triple alongside regional qualifier Josh Fowler, who placed fifth in the event at ACCs.