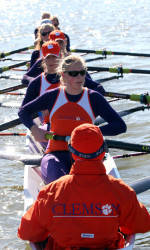 San Diego, CA – The Clemson rowing team had a strong showing at the second day of the San Diego Crew Classic, with both the Varsity 8+ and Novice 8+ teams coming in first place in their respective races.

After a third place finish in their heat yesterday, the Second Varsity 8+ crew went on to compete in the grand final today. The Tigers finished in fourth place with a time of 6:42.75 behind crews from Washington, USC, and Washington State.

The Tigers will return to action when they host the ACC Championships on April 19th on Lake Hartwell.