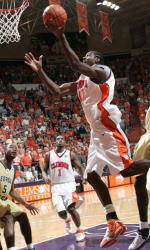  Clemson has won three consecutive games against Georgia Tech, Clemson’s longest winning streak in the series since the Tigers won 14 in a row in the series between 1971-72 and 1981-82.

 Clemson won at Georgia Tech last year and will be attempting to gain victory in back-to-back ACC road games at the same venue for the first time since the 1996-97 and 1997-98 seasons when the Tigers were victorious at Florida State.

 Clemson has lost each of its last two games on made field goals by the opposition with less than 16 seconds left. Clemson is 2-2 this year in games that have come down to the final 20 seconds. One of the victories was over Georgia Tech in the first meeting between the two teams on Jan. 6. James Mays scored the game winner with 2.2 seconds left for a 75-74 Clemon victory.

 Rebounding has been the problem for Clemson of late. When the Tigers won their first 17 games o the year they were out-rebounded just twice (Monmouth and Georgia Tech). Clemson has now been out-rebounded in each of the last five games. and has a 1-4 record in those contests.

 Clemson out-shot Duke and Virginia from the field in its last two games, but lost both contests. Clemson was out-rebounded, 79-53 in those two games combined, including a 32-16 deficit in offensive rebounding.

 A victory on Saturday would give Clemson 19 wins, equalling the total the Tigers had all of last year.

 James Mays had six assists against Virginia and now has 60 for the season. He is just nine short of the Clemson record for a post player.

 Vernon Hamilton has scored in double figures in a career high tying six straight games. He has a 16.0 scoring average over that time period.

 Cliff Hammonds has had more turnovers than assists in just one of 22 games this season.