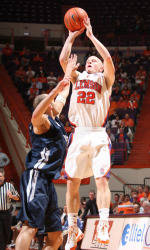 Quick Facts  Tuesday’s game will be the 159th meeting on the hardwood between Clemson and South Carolina. The Gamecocks own an 86-72 advantage in the series, but the Tigers have won four straight current Head Coach Oliver Purnell.

 Clemson has won two straight in Columbia and five out of the last seven in the state capital against the Gamecocks.

 The Tigers moved up to #16 in the ESPN/USA Today coaches’ poll on Dec. 29 and #20 in the Associated Press rankings.

 Clemson has won its last eight road games against non-conference opponents, which is a school record streak. The Tigers won earlier this year at Charlotte and at Illinois in the ACC/Big Ten Challenge.

 The Tigers are 12-0 for the second time in the last three seasons. In 2006-07, Clemson was the nation’s last remaining unbeaten team at 17-0. This year, nine undefeated teams remain in Division I.

 Clemson won at Miami (FL) in its ACC opener last time out by a score of 91-72. The 19-point margin of victory was the sixth-largest in an ACC road game in school history.

 K.C. Rivers was named ACC Player-of-the-Week on Dec. 22 after scoring 28 points in the win over Miami. It was the second weekly honor earned by the senior captain in his career.

 Trevor Booker needs just four rebounds to reach 600 for his career. He currently ranks third in the ACC with 9.6 rebounds per game and is coming off a 16-board performance versus Miami.

 Terrence Oglesby is the ACC’s active leader with at least one three-point goal in 20 straight games. His streak ranks in a tie for the seventh-longest in school history.

 Jerai Grant had nine points in the Miami win and has now made 26-32 field goals on the season. His total is one more than he had his entire freshman year, in 22 less attempts.