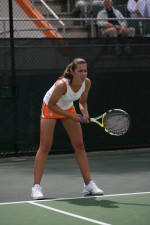 GREENVILLE, SC – A pair of Clemson women’s doubles teams posted a combined 4-2 record at the Furman Fall Classic on Friday to place second and third in their respective flights. Due to inclement weather, play was forced inside and the first round of singles matches, originally scheduled for Friday afternoon, was postponed. Action will resume on Saturday morning and continue on Sunday at the Mickel Tennis Center on the campus of Furman University.

At the top flight, Clemson’s 17th-ranked doubles team of Ani Mijacika and Federica van Adrichem defeated Tennessee’s Whoriskey and Sorbello, 8-4, in the opening match of the tournament. The Tiger tandem then won easily over Newman and Ulery of Vanderbilt, 8-2, to advance to the championship match. The team was then edged by North Carolina’s Tsang and Featherston in the tie-break (9-8(3)) to finish second in the tournament.

Ina Hadziselimovic and Alexandra Luc partnered in the number three doubles bracket and placed third on Friday. The Clemson duo defeated Davidson and Rynasewska of Florida State by an 8-3 margin to open the event. They then fell to Tennessee’s team of Zubor and Pluskota in the second round, 8-6, before besting Miller and Rajic of South Carolina in the consolation final, 8-2.

All four players, in addition to rookie Josipa Bek, will return to the courts on Saturday to vie for singles titles.