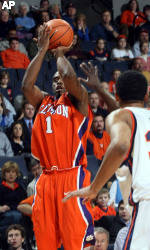  Clemson gained its 20th overall victory and 8th in ACC play in its 79-69 win over Miami (FL) on Wednesday. Clemson has now won at least 20 games in consecutive seasons for just the second time in school history. The other two-year run was in 1979-80 and 1980-81.

 With the eighth win in ACC play achieved last Wednesday against Miami, Clemson has now clinched at least a break even season in league play. It is the most ACC wins for the Tigers since 1996-97 when Clemson was 9-7. This will be the 11th time in 55 years that Clemson has had a .500 or better record in ACC play.

 Cliff Hammonds played in his 80th Clemson victory when the Tigers defeated Miami (FL). He is now the second winningest player in Clemson history trailing only Elden Campbell who played in 84 wins from 1986-90.

 Clemson’s senior class is also the second winningest senior class in Clemson history on a total victories basis with 80, trailing the senior of 1990 by four. The five players have a record of 80-47. In the four years prior to their arrival, Clemson was 50-67.

 A win at Maryland would give this group of seniors 10 ACC road wins. That would be a record. Many other classes have had nine, but no class has 10.

 Cliff Hammonds is shooting 50.7 percent from the field in ACC play this year, fifth best in the ACC for conference games only. He is averaging 14.1 points per game in ACC play, above his 12.0 overall average.

 K.C. Rivers has 141 steals and 120 turnovers for his career. He has a 50/28 ratio this year. Rivers is shooting 48.7 pecent from three-point range in ACC play, including the 4-5 outing against Miami. That is first in the ACC for conference games.

 A victory at Maryland would give Clemson nine ACC wins and 21 overall wins. Every ACC team in history with at least nine league wins and 20 overall wins has been selected for the NCAA Tournament.

 Only seven active Division I coaches have had a 20-win season at four schools. Two of the seven are Oliver Purnell and Gary Williams.

 Clemson begins its March schedule on Sunday. Oliver Purnell has a 10-9 record in March since he took over at Clemson in 2003-04. He is one of just two coaches in Clemson history with a winning record in March (min 2 games). Joe Davis was 6-2 in March from 1932-40.