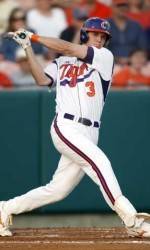 The Monday and Tuesday games will be available live via webcast on TigerCast. All four games will also be broadcast live on the radio by WCCP (104.9 FM) out of Clemson and can be heard live on the internet at ClemsonTigers.com for all four games as well.

The Series Clemson and Florida Gulf Coast have never met on the diamond.

The Starting Pitchers In game-one, Florida Gulf Coast will start junior lefty Chris Sale (6-0, 2.15 ERA) on the mound. The Lakeland, FL native has made 10 starts and one relief appearance for a total of 67.0 innings pitched. He has allowed 56 hits (.225 opponents’ batting average) and nine walks with 93 strikeouts.

The Tigers will counter with junior lefthander Casey Harman (5-1, 3.39 ERA) on Saturday. The South Burlington, VT native has made 10 starts for a total of 63.2 innings pitched. He has allowed 53 hits (.224 opponents’ batting average) and 16 walks with 54 strikeouts.

In game-two, the Eagles will send out senior righty Pete Woodworth (6-1, 5.30 ERA) on the mound. The Saint Petersburg, FL native has made nine starts and two relief appearances for a total of 56.0 innings pitched. He has yielded 64 hits (.291 opponents’ batting average) and 26 walks with 46 strikeouts.

Clemson will counter with sophomore righty Scott Weismann (3-2, 4.53 ERA) on Sunday. The Boxborough, MA native has made 10 starts for a total of 57.2 innings pitched. He has given up 59 hits (.262 opponents’ batting average) and 16 walks with 49 strikeouts.

In game-three, Florida Gulf Coast will start junior righthander Richie Erath (5-1, 3.23 ERA) on the mound. The West Palm Beach, FL native has made nine starts and two relief appearances for a total of 69.2 innings pitched. He has given up 58 hits (.227 opponents’ batting average) and 16 walks with 53 strikeouts.

The Tigers will counter with freshman righthander Dominic Leone (2-0, 3.41 ERA) on Monday. The Norwich, CT native has made nine relief appearances and four starts for a total of 34.1 innings pitched. He has allowed 31 hits (.235 opponents’ batting average) and nine walks with 27 strikeouts.

Both team’s starting pitchers for game-four on Tuesday have yet to be determined.

The Eagles Florida Gulf Coast, led by eighth-year Head Coach Dave Tollet, enters the series at #25 Clemson with a 27-13 overall record and 17-4 Atlantic Sun mark after beating South Florida 10-9 on the road on Tuesday. The Eagles also swept Belmont at home in a three-game series last weekend. Florida Gulf Coast, who is in first place in the Atlantic Sun Conference standings, is 14-6 on opponents’ home fields and has not lost more than two games in a row all season.

Florida Gulf Coast is averaging 8.3 runs per game and hitting .331 with a .482 slugging percentage and .417 on-base percentage. The team has totaled 101 doubles, nine triples, 34 home runs, and 31 stolen bases.

Zach Maxfield leads the team with a .383 batting average along with 15 doubles, five homers, and 33 RBIs. Stephen Wickens is batting .376 with a team-high 14 stolen bases, while Mikel Alvarez is hitting .373 with 11 steals. Tim Roberson leads the team in homers (8) and RBIs (44) as well.

The pitching staff has a 5.09 ERA and .281 opponents’ batting average along with 340 strikeouts against 137 walks in 357.0 innings pitched. Junior lefty Chris Sale, the Eagles’ scheduled starter on Saturday, is one of the nation’s top professional prospects who has a 6-0 record, 2.15 ERA, and 93 strikeouts against only nine walks in 67.0 innings pitched. Junior righthander Jack Wagoner has seven of the team’s 12 saves in 25.1 innings pitched over 19 appearances (one start). The Eagles are fielding at a .969 clip as well.

The Tigers Clemson, ranked as high as #25 in the nation, enters the series against Florida Gulf Coast with a 25-16 overall record and 11-10 ACC mark after falling twice in three games at home to North Carolina last weekend. The Tigers, who were off five days for final exams from Monday through Friday, are also 20-7 at home this season.

The pitching staff has a 4.68 ERA and .271 opponents’ batting average. The staff has allowed 135 walks against 289 strikeouts. Righthanders Alex Frederick, and Jonathan Meyer all have two saves apiece. The Tigers are fielding at a .961 clip as well.

Polls The Tigers fell five spots to #25 in the Sports Weekly coaches poll this week after going 2-2 in four games last week. The Tigers are unranked in both the Baseball America and Collegiate Baseball polls. With Clemson’s top-25 ranking this week, it marks the 29th week in a row the Tigers have been ranked in the top 25 of at least one of the three major polls dating to the start of the 2009 season.

Parker First to Join the “20-15” Club Prior to the season, Kyle Parker privately told Head Football Coach Dabo Swinney that his goal for the 2009-10 academic year was a “20-20.”

He had already thrown 20 touchdown passes on the football team, helping the Tigers to a top-25 final ranking and the ACC Atlantic Division title. He wanted to match that with 20 homers on the diamond, and thereby help Clemson to an ACC baseball title.

Research that included contacting every Division I school that plays college football revealed that no student-athlete had ever achieved even a “20-15” in the same academic year, or any other year for that matter. On April 21, Parker hit a grand slam in the second inning of Clemson’s 22-4 victory over USC Upstate. It was his 15th long ball of the year.

Tar Heels Edge Tigers Twice to Take Series North Carolina won two close games over #20 Clemson in a three-game series at Doug Kingsmore Stadium from April 23-25. Clemson outscored the Tar Heels 16-15, but North Carolina outhit the Tigers .284 to .267. Kyle Parker led the Tigers by going 6-for-11 (.545) with a homer, double, three RBIs, and two walks, while John Hinson added two doubles and a home run. Clemson also had a 4.33 ERA and committed just two errors in the series.

In game-one on April 23, Matt Harvey struck out 15 batters in a complete-game six-hitter to lead North Carolina to a 5-3 win over Clemson. Harvey allowed three runs and one walk in throwing 156 pitches. Nine of his 15 strikeouts were looking. Levi Michael went 3-for-4 with a homer, double, and four RBIs to lead the Tar Heels, who outhit Clemson 9-6 and scored all five of their runs on two-out hits. Hinson went 2-for-4 with a homer and two RBIs. Casey Harman allowed three earned runs in 7.0 innings pitched but took his first loss after not suffering a defeat in his previous 17 starts dating to 2009.

In game-two, which was suspended on April 24 due to inclement weather and was completed on April 25, Clemson rallied from a 5-0 deficit to defeat North Carolina 10-6. The Tigers scored six runs in the fourth inning to take the lead for good. Every Tiger starter had at least one hit, as both teams had 13 hits in the game. Parker went 3-for-4 with a homer, double, and two RBIs. Alex Frederick pitched 1.2 hitless and scoreless innings in relief to earn the win, while Will Lamb struck out the only batter he faced to record the save.

In game-three, pinch-hitter Brett Knief hit a two-out double to score Ryan Graepel in the ninth inning to lift North Carolina to a 4-3 win over Clemson. The Tar Heels scored three runs in the first, then Clemson tied the score with two runs in the second. After six scoreless innings, Graepel lined a two-out single and scored on Knief’s double to right-center. In the bottom of the ninth, Clemson loaded the bases with one out, but Chris Epps struck out to end the game. Dominic Leone pitched 8.0 innings in his first career ACC start. He allowed just one hit and no runs in his final 6.0 innings pitched after surrendering a leadoff single in the third.