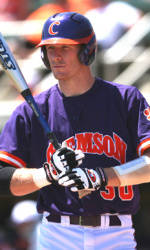 Clemson vs. Maryland Clemson (16-7, 4-5 ACC) will travel to College Park, MD to take on Maryland (13-11, 2-7 ACC) in a three-game series at Shipley Field this weekend. Game times are 7:00 (Friday), 4:00 (Saturday), and 1:00 (Sunday). All three games will be broadcast live on the radio by Clemson Tiger Sports Network. Live stats will also be available at ClemsonTigers.com for all three games.

The Series Clemson and Maryland have met 144 times on the diamond, with the Tigers holding a 107-37 lead in the series dating back to the 1923 season. Last year at College Park, the Terrapins won the first two games. The Tigers bounced back to win the series-finale, giving Jack Leggett his 1,000th career victory as a head coach.

The Tigers hold a 35-27 advantage all-time in games played at Maryland. Clemson also holds a 94-34 advantage in ACC regular-season games. Leggett is 38-6 against the Terrapins as Clemson’s head caoch, including a 14-6 mark at Shipley Field.

The Starting Pitchers In game-one, Maryland will start sophomore righthander Scott Swinson (3-2, 4.24 ERA) on the mound. The Ellicott City, MD native has made five starts for a total of 34.0 innings pitched. He has allowed 43 hits (.312 opponents’ batting average) and 13 walks with 27 strikeouts.

The Tigers will counter with junior righthander D.J. Mitchell (2-2, 3.24 ERA) on Friday. The Rural Hall, NC native has made five starts and two relief appearances for a total of 33.1 innings pitched. He has yielded 32 hits (.254 opponents’ batting average) and 15 walks with 31 strikeouts.

In game-two, the Terrapins will send out junior righty Jensen Pupa (0-3, 6.93 ERA) on the mound. The Germantown, MD native has made five starts for a total of 24.2 innings pitched. He has yielded 32 hits (.323 opponents’ batting average) and 18 walks with nine strikeouts.

Clemson will counter with freshman righthander Graham Stoneburner (4-0, 2.70 ERA) on Saturday. The Richmond, VA native has made five starts and one relief appearance for a total of 30.0 innings pitched. He has allowed 21 hits (.198 opponents’ batting average) and five walks with 24 strikeouts.

Maryland’s starter for game-three has yet to be determined.

The Tigers will start junior lefthander Ryan Hinson (1-3, 5.28 ERA) on Sunday. The Rock Hill, SC native has made five starts and one relief appearance for a total of 29.0 innings pitched. He has allowed 35 hits (.299 opponents’ batting average) and eight walks with 29 strikeouts.

The Terrapins Maryland, led by eighth-year Head Coach Terry Rupp, enters the series against Clemson with a 13-11 overall record and 2-7 ACC mark after winning midweek games against George Mason (6-4) and Maryland-Baltimore County (6-5) on Tuesday and Wednesday, respectively. The Terrapins also won one of three games at home against #3 North Carolina last weekend. Maryland sports an 8-4 home record as well.

Nick Jowers is hitting .329 with a .478 on-base percentage and team-high five stolen bases, while Jensen Pupa is hitting .324. Mike Murphy has added six homers and 18 RBIs, while Chad Durakis has totaled three long balls and 22 RBIs.

The pitching staff has a 5.67 ERA and .311 opponents’ batting average along with 144 strikeouts against 107 walks in 212.2 innings pitched. Freshman righthander Matt Quinn has a 3-1 record, 2.05 ERA, and three saves in 12 relief appearances. He has also allowed just one walk in 22.0 innings pitched. Maryland is fielding at a .975 clip as well.

The Tigers Clemson enters the series at Maryland with a 16-7 overall record and 4-5 ACC mark after winning two one-run games against Elon on Tuesday and Wednesday. The Tigers are also coming off two wins in three games at home against N.C. State last weekend. Clemson, who has a 2-3 road record, has had 16 of its 23 games decided by three runs or less.

The Tigers are hitting .312 with a .394 on-base percentage and .498 slugging percentage. The team has totaled 28 stolen bases, including a team-high seven by Stan Widmann.

Kyle Parker leads the team with a .373 batting average along with five doubles, six homers, and 16 RBIs. Ben Paulsen is hitting .338 with seven homers and 17 RBIs, while Doug Hogan has totaled eight doubles, seven home runs, and 26 RBIs.

The pitching staff has a 4.15 ERA and .262 opponents’ batting average. Righthander Matt Vaughn has struck out 19 against six walks in 13.1 innings pitched and has seven saves in 11 relief appearances. The Tigers are fielding at a .966 clip as well.

Tigers Win Two One-Run Games Over Elon Clemson won two one-run games against Elon at Doug Kingsmore Stadium on March 25,26. The Tigers outscored the Phoenix 7-5 and outhit Elon .228 to .148. Mike Freeman went 4-for-6 with three runs scored and two walks in the two games. The Tiger pitching staff had a 2.50 ERA and allowed just nine hits and three walks with 20 strikeouts. Clemson did not commit an error in the two-game series as well.

In game-one on March 25, Ben Paulsen solo home run in the fifth inning proved to be the difference in Clemson’s 5-4 victory over Elon at Matt Vaughn closed the door in each frame to preserve the win. Matt Zoltak earned the victory in relief, while Vaughn pitched a hitless and scoreless ninth inning to pick up the save. Freeman had a game-high three hits and two runs scored, while Paulsen added a double, homer, and two runs scored for the Tigers, who outhit the Phoenix 8-5.

In game-two on March 26, Kyle Parker bases-loaded walk gave the Tigers the lead for good. Meanwhile, Clemson’s trio of pitchers combined to allow just four hits, one run, and no walks with 13 strikeouts. Gullickson earned the win in 5.0 innings of work, while Hinson pitched 2.0 perfect innings with three strikeouts to record the save. Sarratt also pitched 2.0 perfect innings in relief with two strikeouts. Hogan had two hits and one RBI for the Tigers, who drew eight walks.