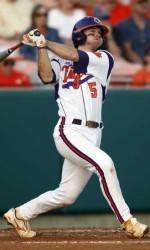 Clemson vs. Furman Clemson (31-17), ranked as high as #22 in the nation, will face Furman (13-31 entering Monday’s game at Western Carolina) on Tuesday night at Fluor Field in Greenville, SC. First pitch is scheduled for 7:00 PM.

The Tigers will be the designated visiting team and occupy the third-base dugout. The contest will be broadcast live on the radio by WCCP (104.9 FM) out of Clemson and can be heard live on the internet at ClemsonTigers.com.

The Series Clemson and Furman have met 198 times on the diamond, with the Tigers holding a 136-58-4 advantage dating back to the 1896 season. Clemson’s first two games in school history were against the Paladins, both losses in 1896, which were the Tigers’ only games that season. The two teams have played at least one game every year since 1983.

Earlier this season at Doug Kingsmore Stadium, the Tigers defeated the Paladins 8-5 behind two hits, three runs, and two walks by Doug Kingsmore Stadium on March 3, Furman scored two runs in the 14th inning to edge the Tigers 4-2. Then at Fluor Field in Greenville, SC on May 11, Wilson Boyd tallied four hits to lead Clemson to an 8-5 win over Furman.

The Starting Pitchers Both team’s starting pitchers have yet to be announced.

The Paladins Furman, led by 17th-year Head Coach Ron Smith, enters Monday’s game at Western Carolina with a 13-31 overall record and 5-18 SoCon mark after losing the first two of three games at Western Carolina over the weekend. Furman, who has lost six games in a row, was also swept at home by Georgia Southern in its previous series.

Will Muzika is hitting a team-best .351 with 12 homers and 45 RBIs, while Aaron Thompkins is batting .338. Will Miller has added a team-high 14 stolen bases in 16 attempts and J.B. Jenkins has a team-best 10 doubles.

The pitching staff has a 7.04 ERA and .316 opponents’ batting average along with 258 strikeouts against 196 walks in 384.2 innings pitched. Senior righthander Nick Karow has three of the team’s seven saves. The Paladins are fielding at a .952 clip as well.

The Tigers Clemson, ranked as high as #22 in the nation, enters Tuesday’s game against Furman with a 31-17 overall record and 14-10 ACC mark after sweeping Maryland on the road over the weekend. The Tigers, who have won six games in a row, are 1-1 in neutral-site contests this season.

The pitching staff has a 4.60 ERA and .276 opponents’ batting average. The staff has allowed 157 walks against 326 strikeouts. Righthanders Alex Frederick, Tomas Cruz, and Jonathan Meyer all have two saves apiece. The Tigers are fielding at a .959 clip as well.

Polls The Tigers moved up two spots to #22 in the Sports Weekly coaches poll this week after going 4-0 in four games last week. The Tigers are unranked in both the Baseball America and Collegiate Baseball polls. With Clemson’s top-25 ranking this week, it marks the 31st week in a row the Tigers have been ranked in the top 25 of at least one of the three major polls dating to the start of the 2009 season.

ACC Standings The Tigers are in second place in the ACC Atlantic Division standings with a 14-10 league record. In the division, Florida State is in first place with a 16-8 record, while Boston College is third at 13-14. N.C. State is fourth at 11-13, while Wake Forest is fifth at 4-20 and Maryland is sixth (4-23). Virginia and Miami (FL) are tied for the overall ACC lead at 18-6, while Georgia Tech is third at 17-7. In the overall ACC standings, Clemson is tied for fifth place with Virginia Tech.

Tigers 6-1 All-Time at Fluor Field Fluor Field, the home of the Boston Red Sox A affiliate Greenville Drive since 2006, is modeled after Fenway Park, with identical field dimensions and a “Green Monster.” The Tigers have played seven games at the ballpark since 2007 and are 6-1.

Cruzing of the Mound Senior righthander Tomas Cruz (Amarillo, TX) has emerged of late as one of the team’s best pitchers out of the bullpen. After getting off to a slow start to the 2010 season, Cruz has given up just five hits and no runs during his last 10.2 innings pitched over four relief appearances.

Against Florida Gulf Coast in the first game of a doubleheader on May 2, he pitched 4.0 scoreless innings to record the save. Then in his next outing at Maryland on May 9, he entered the game with the Tigers trailing and pitched the final 4.2 innings to earn the victory. He allowed just one hit, no runs, and no walks with four strikeouts.

Tigers Use Bats to Sweep Terrapins on the Road The #24 Clemson Tigers swept Maryland by a combined score of 37-19 at Bob Smith Stadium from May 7-9. Clemson outhit the Terrapins .353 to .315 and totaled 42 hits, 11 doubles, four homers, 20 walks, and four steals. Mike Freeman and Jeff Schaus hit two home runs with five RBIs.

In game-one on May 7, Freeman went 4-for-5 with three RBIs to lead Clemson to an 18-6 win over Maryland. Lamb went 3-for-6 with two doubles, two RBIs, and three runs, while Parker went 3-for-4 with two doubles, an RBI, three runs, and two walks in the Tigers’ 18-hit attack. Clemson totaled seven doubles and a two-run homer by Schaus. The Tigers put the game out of reach with seven runs in the seventh inning. Casey Harman allowed two runs on six hits in 6.0 innings pitched to earn the victory.

In game-three on May 9, Parker hit a three-run homer in the sixth inning to give Clemson the lead and Tomas Cruz pitched 4.2 masterful innings in relief in the Tigers’ 7-5 win over Maryland. The Terrapins took a 5-3 lead with two runs in the fifth inning, but after the first two Tigers were retired in the sixth, Clemson rallied to score four two-out runs and take the lead. Cruz allowed just one hit, no runs, and no walks with four strikeouts to earn the win. Lamb led the Tigers with two hits, while Hinson added two runs.