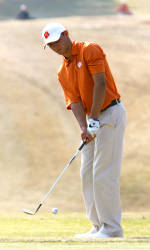 Clemson, SC – Clemson golfers Kyle Stanley, Ben Martin and David May have all been named to the All-ACC team for 2009. It is the third selection for Stanley, the second for Martin and the first for May. All three players have been big reasons Clemson’s team ranks fourth in the nation according to the latest Golf World Coaches Poll and sixth according to the Sagarin Computer Rankings.

This is the first time since the 2004 season that three Tigers have been named first-team All-ACC, but the 13th time in the 26 years Larry Penley has served as head coach of the Clemson program.

Stanley has a 71.58 stroke average this year and was named a semifinalist for the Ben Hogan Award. He leads Clemson in stroke average, top 10 finishes (6), under par rounds (12) and rounds in the 60s (7). It is the third consecutive year the junior from Gig Harbor, WA has been selected.

Martin was named to the All-ACC team two years ago and returned to the team this year. He is second on the Clemson team in stroke average at 72.38, but his 71.20 average in the spring is best on the team. He has finished in the top 15 individually in all five Clemson spring events, including a third-place showing at the Puerto Rico Classic when he shot a 206 score, 10 under par.

May is third on the Clemson team in stroke average with a 72.52 average, but he is coming off his top career finish. He was co-medalist at the ACC Tournament in April with a 206 score. For the year he has three top 10 finishes and 13 rounds at par or better.